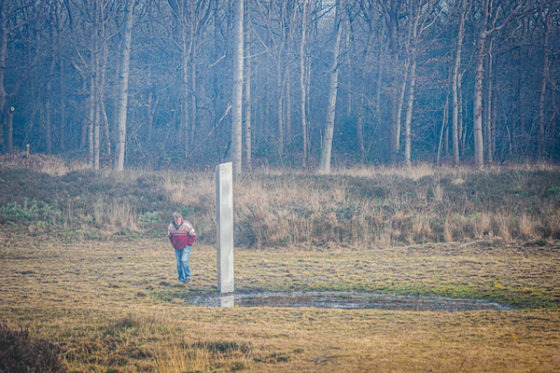 A monolith similar to those found in the United States and Romania in recent weeks has turned up on a heath in Friesland.

The metal pillar in the Kiekenberg nature reserve near Oudehorne was first spotted by walkers on Sunday morning. It lacks the glossy finish of the objects in Utah, California and Piatra Neamt in Romania, but otherwise bears a strong resemblance.

Omrop Fryslân reported that there was no trace of any footprints round the base of the structure or any other clues as to how it got there. ‘I walked over to it but there was nothing to see around the monolith,’ walker Thijs de Jong said. ‘It’s as if it was dropped from above. It must have taken at least two people to carry it.’

De Jong said he was sceptical about claims that the object was put there as a prank by organisers of end-of-year celebrations. ‘Here in Oudehorne we don’t have a New Year’s Eve team,’ he said. ‘I think it’s more likely to be an artists’ collective. But there’s no name on it. I heard that the object had been removed last night [Sunday].’

The two objects in the United States were taken away shortly after appearing. The first, near Canyonlands national park in the Utah desert, was dismantled by a group of four men 10 days after it was found on November 18 and taken away in a truck. The unidentified team left the message ‘bye bitch’ and a ‘fresh pee stain’ in the dirt at the spot where the object stood.

The California monolith, which stood on top of Pine Mountain, Atascadero, was replaced by a plywood cross erected by a group of young men in camouflage gear and night vision goggles who livestreamed themselves tearing down the structure while yellling ‘Christ is King!’ and singing country songs. The San Luis Obispo Tribune described the video as ‘at times racist and homophobic’.

The Romanian monolith, in a remote spot near an ancient Dacian fortress, was reported to have ‘quietly’ vanished four days after it appeared on November 26.

On Sunday morning another monolith was reported to have turned up on a beach on the Isle of Wight, UK.

The objects were dubbed monoliths because of their resemblance to the structures that appear in Stanley Kubrick’s film 2001, where they accompany crucial stages in the evolution of mankind.