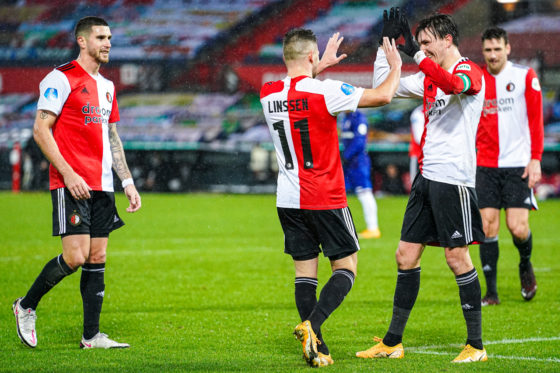 Ajax go into the Christmas break with a lead of just one point in the Eredivisie after they could only manage a draw at home against struggling Willem II.

Erik ten Hag’s side took the lead in Tilburg after just three minutes as Antony pounced on some slack defending, but lost momentum and were punished shortly after half-time when Kwasi Wriedt squeezed a shot into the corner.

A frustrated Ten Hag said he warned his team at half-time not to rest on their laurels. ‘They needed to step up a gear, but I didn’t see that extra gear until after the equaliser.’

The result raises the stakes for Ajax’s next match in Amsterdam on January 10 against second-placed PSV, who comfortably beat VVV Venlo in the Philips Stadium. The visitors went ahead against the run of play through Jafar Arias’s deflected shot, but Philipp Max levelled the scores with a penalty before half-time and PSV’s dominance in the second half yielded three goals, including a stunning curling strike by Cody Gakpo.

A hat-trick by Bryan Linssen lifted Feyenoord into third place against Heerenveen, who slipped to eighth place and continued a seven-match winless run dating back to November 1.

Feyenoord reclaimed third place from Vitesse Arnhem, who went down 3-1 in Alkmaar. AZ’s third goal was scored by Ferdy Druijf just 13 seconds after he came on as a substitute for the injured Myron Boadu, setting a new Eredivisie record.

Emmen remain bottom of the table without a win in 14 matches after losing 3-2 at home to Utrecht, who recorded their first win in seven. The visitors were 2-1 down at half-time but turned the game around thanks to the pace of Gyrano Kerk, whose surging runs set up goals for Joris van Overeem and substitute Adrian Dalmau.

Groningen’s four-match winning run came to an end as they lost at home to Heracles, Adrian Szöke scoring the only goal in the 78th minute with a delicate chip after springing the offside trap.

PEC Zwolle recorded their first away win of the season in The Hague to leave ADO in the relegation zone, with second-half goals by Mike van Duinen and Clint Leermans.

Fortuna Sittard bagged an injury-time winner to beat RKC Waalwijk 2-1 as Lisandro Semedo swept in a deep pass by George Cox, while Sparta moved up to ninth place with a 2-0 win in Enschede thanks to goals from Mario Engels and Deroy Duarte.

Utrecht and AZ Alkmaar will play their match in hand on Sunday evening before the Eredivisie resumes on January 10.