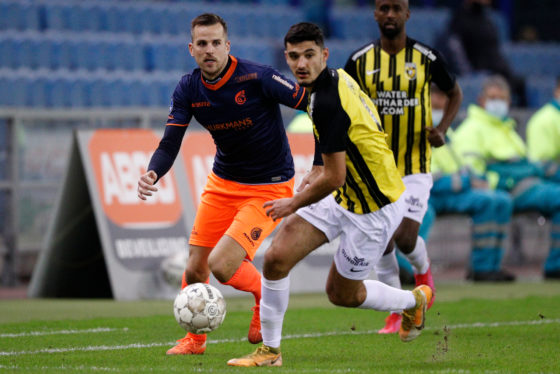 Vitesse Arnhem kept the gap to Eredivisie leaders Ajax to two points with a hard-won victory over Fortuna Sittard.

This season’s surprise packages set a club record of 25 points from their first 10 games in a game in which they dominated territorially but created few clear chances.

Oussama Darfalou broke the deadlock in the 71st minute, heading in a corner from the impressive Oussama Tannane, before Chelsea loanee Armando Broja sealed the points by volleying in Tannane’s free-kick from close range.

Ajax had an easier afternoon in Emmen on Saturday, brushing aside the Drenthe club 5-0 to set a club record of their own, having found the net 42 times in their first 10 matches.

Midfielder Davy Klaassen opened the scoring in the 20th minute, overlapping with Larissa Traoré before looping the ball in off the foot of Miguel Araujo, then set up the second with a sublime floated pass for Zakaria Labyad. Larissa Traoré added a third before half-time, while substitutes Jurgen Ekkelenkamp and Quincy Promes also got on the scoresheet.

PSV remain in third place but only after scraping past Sparta 1-0 with a late Donyell Malen penalty, in a match which saw manager Roger Schmidt make eight changes to the side that beat PAOK Salonika in midweek.

Feyenoord came from behind at home to Utrecht to extend their unbeaten run since Dick Advocaat’s arrival to 24 matches. Utrecht had plenty of chances to add to Mark van der Maarel’s early second-half strike, but goalkeeper Nick Marsman kept Feyenoord in the game before Lutsharel Geertruida poached an equaliser on 65 minutes.

‘In terms of chances Utrecht were clearly the superior side,’ said Advocaat. ‘I could go looking for excuses, but I don’t have any. I’m not going to complain.’

AZ Alkmaar are also still unbeaten with a game in hand as Myron Boadu crowned his return to the team after a coronavirus infection by netting the decisive goal in a 2-1 win at Heracles.

RKC Waalwijk upset the form book with a resounding 2-0 victory at high-flying Twente. First-half goals from Cyril Ngonge and Finn Stokkers, both assisted by former Twente midfielder Ola John, earned the Brabant side their second win of the season.

Sixth-placed Heerenveen failed to win for the third match in a row, drawing 1-1 at lowly ADO. David Philipp put the home side ahead after 13 minutes but the lead lasted just three minutes as Joey Veerman rounded off a one-two with Ibrahim Dresevic.

Groningen moved up to eighth with a trademark 1-0 win at home against Willem II, Ahmed El Messaoudi scoring just after the hour mark with a low shot into the corner.

VVV and PEC Zwolle both moved on to nine points with a 2-2 draw in Limburg. PEC looked to be on course for victory after coming back from 1-0 down to lead 2-1 through Mike van Duinen’s 69th-minute strike, but Georgios Giakoumakis’s ninth goal of the season earned a share of the spoils.