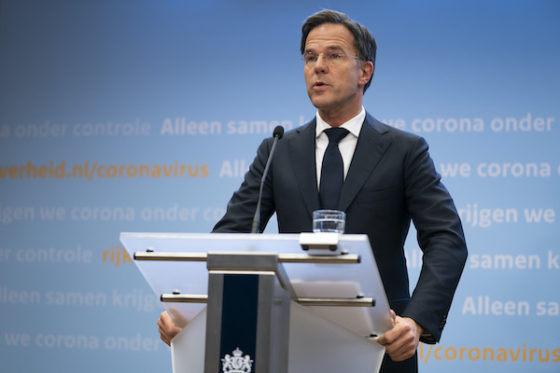 Although the number of positive coronavirus tests is going down, dipping under 8,000 on Tuesday, a number of regions still show rising infections and they face a full lockdown if there is no change in the coming days, prime minister Mark Rutte told reporters on Tuesday.

Rotterdam, the Dordrecht health district and parts of Twente are showing high infection rates and no reduction, despite the partial lockdown, Rutte said. If there is no improvement, they could see a full lockdown, including a curfew, secondary school closures and non-essential shop closures within the next few days.

In addition, Rutte confirmed that the current partial lockdown, including cafe and restaurant closures, will now run until mid December. And, the government is also  introducing an extra layer of measures which will run for the next two weeks, from Wednesday morning.

As reported earlier, these include museum, cinema, amusement park and zoo closures and a reduction in the number of non-family members who can form a group outside. ‘If you are out walking with more than one friend, you will be liable to be given a fine,’ Rutte said.

Shops, hairdressers and other contact professions will remain open, as will gyms, but group lessons at sports schools are also out for the coming two weeks. Casinos and swimming pools will also close and funerals and weddings face further restrictions on numbers.

The aim, the prime minister said, is to ensure there are less social contacts between people and less movement on the streets. This, in turn, will give an extra impulse to further reducing the infection rate.

Rutte also said the ‘urgent advice’ is not to travel abroad before mid January, at least. ‘Most areas are also red or orange anyway,’ he said. ‘So do not go abroad unless absolutely necessary.’

The infection rate may be dropping but the decline is not good enough, health minister Hugo de Jonge said. ‘Pressure is still increasing on hospitals, and we are taking these extra measures to show solidarity with the people working in healthcare, with the people who need treatment for other illnesses.’

De Jonge said he expects the number of hospital admissions during the second wave to up be 25% on the first wave, but spread over a longer period. Coronavirus has also been tracked to one in four nursing homes, he said.

A decision on Christmas, on fireworks at New Year and will be taken in the next few weeks, Rutte said. The next two weeks will be extra tough, he said, but if the extra measures have the desired effect, we will all be able do more at Christmas.