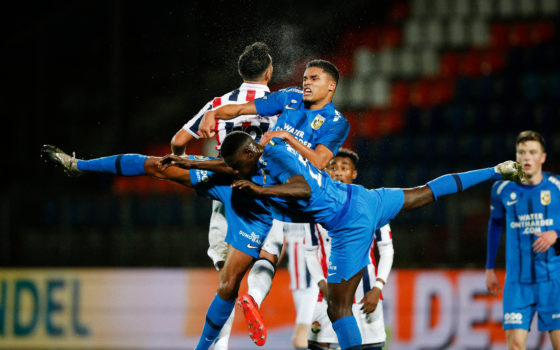 Ajax and Vitesse Arnhem remain level on points at the top of the Eredivisie as they each notched up their sixth win in the opening seven games.

Bottom side Fortuna Sittard took an early lead in the Johan Cruyff Arena as Zian Flemming’s jinking run ended with a perfectly weighted ball to George Cox, who fired home from close range. But the champions prevailed in a 5-2 win.

Ajax were awarded three penalties, all taken by different players. Davy Klaassen struck the first against the post but was able to tuck away the rebound after the ball glanced off the glove of the desperately unlucky Yanick van Osch. Substitutes Dusan Tadic and Quincy Promes scored from the spot in the second half.

Eighteen-year-old debutant Brian Brobbey got on the scoresheet when he bundled in another rebound after David Neres’s low shot hit the post, while Cox pulled a late goal back for Fortuna with a swerving cannonball.

Vitesse also had to come from behind in Tilburg after Ché Nunnely tapped in Mike Tresor’s pass after 25 minutes. The Arnhemmers stepped up a gear in the second half but needed a stroke of luck to draw level when Lois Openda’s cross drifted into the net. Armando Broja put the visitors ahead after 63 minutes with before Patrick Vroegh made sure of the points five minutes from time.

PSV Eindhoven took to the field against ADO reluctantly after their request to the KNVB to have the match postponed because of their Europa League commitments was turned down. But they brushed off the disappointment and an outbreak of coronavirus to record a comfortable 4-0 victory, with 18-year-old substitute Noni Madueke bagging two goals.

Heerenveen also scored four times away to Sparta Rotterdam to keep up their good early season form. Captain Henk Veerman moved to the top of the goalscoring charts with his sixth and seventh of the season, while Lennart Thy’s late penalty was scant consolation for Sparta, who are still without a win.

Feyenoord came away from Emmen with all three points thanks to an injury-time header by Naoufal Bannis, after Michael de Leeuw’s spectacular dipping half-volley looked to have saved a point for the home side.

Bannis replaced Steven Berghuis, who suffered a leg injury in the first half, but manager Dick Advocaat said he expected Berghuis to be fit for the Europe League clash with CSKA Moscow on Thursday.

AZ Alkmaar ended a run of five draws in the league to beat RKC Waalwijk 3-0. Calvin Stengs latched on to Teun Koopmainers’ superb pass to open the scoring after five minutes, after which Arie Slot’s side missed a stack of chances – including a weakly struck penalty by Koopmainers – before Albert Gudmunsson struck twice late on.

VVV Venlo avoided a repeat of their 13-0 humiliation last weekend at the hands of Ajax, going down 2-1 in Groningen. Norwegian striker Jørgen Strand Larsen set up the first goal for Patrick Joosten and scored the second himself shortly after half-time, while Giorgos Giakoumakis’s overhead kick in the last minute gave Venlo fans something to cheer.

Twente Enschede profited from a string of defensive errors to ease past PEC Zwolle 5-1, but in a weekend lit up by sparkling goals Wout Brama scored arguably the pick of the bunch when he lashed in a corner off the right-hand post with a swerving long-range volley after 32 minutes.

With the top seven teams all winning, Heracles closed the gap on eighth-placed Utrecht by beating them 4-1. Rai Vloet opened the scoring when he tapped in a corner in the third minute and went on to score a hat-trick as well as setting up the second goal for Silvester van der Water.