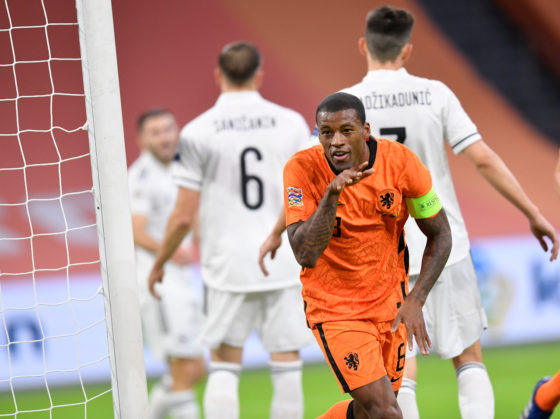 The Netherlands travel to Poland on Wednesday with their hopes of qualifying for the Nations League knock-out stages hanging in the balance after comfortably beating Bosnia-Herzegovina.

However, Italy are favourites to proceed after they beat the Poles 2-0 to go a point clear in Group A. The Italians will qualify with a win in Bosnia on Wednesday, while Oranje must win their last game to have any chance.

Two strikes by captain Georginio Wijnaldum in the first 13 minutes put the Dutch firmly in control in Amsterdam and they never looked seriously in danger, despite Luuk de Jong being wrongly denied by an offside decision in the 26th minute.

Memphis Depay tapped in Denzel Dumfries’s cross for the third goal 10 minutes after the break, and although the visitors pulled one back shortly afterwards through Smail Prvaljak, Oranje were able to see the game out.

The win is Frank de Boer’s first in five matches since taking over as national team coach from Ronald Koeman eight weeks ago.

Wijnaldum and Depay both moved onto 20 international goals for the Dutch national side, with the captain having seven of the last 12 strikes to his name.

‘We were due a win,’ said Wijnaldum. ‘We started the first half well, although we got a bit slack towards the end of the half and they had a few chances. The second half wasn’t as good, we lost the ball a lot and dropped back, which made it more difficult.’