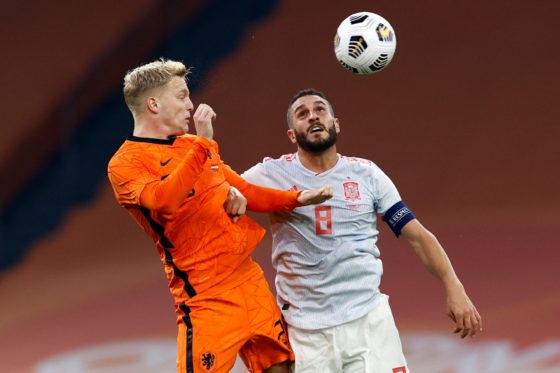 The Netherlands warmed up for their crucial Nations League double-header with a 1-1 draw against Spain in Amsterdam.

The visitors started the brighter and went ahead after 18 minutes when Sergio Canales took a pass from Alvaro Morata and slipped the ball beneath the diving Marco Bizot.

Oranje had already been forced to make their first substitution as Nathan Aké suffered a hamstring in the third minute and was replaced by Donny van de Beek.

Four substitutions at half-time, including a first cap in three years for Davy Klaassen, had an immediate impact as the Dutch scored with their first chance after the break. A cross by Owen Wijndal found its way to Donny van de Beek unmarked on the right-hand side and the Manchester United striker fired the ball high into the net.

Memphis Depay had a golden chance to put his team in front from Denzel Dumfries’s cross, but the ball got stuck under his foot and his shot was well saved by Unai Simon. The Spanish goalkeeper was called into action again shortly afterwards to deny Luuk de Jong.

The result leaves Frank de Boer still waiting for his first win as manager as he prepares for the final Nations League group matches at home to Bosnia-Herzegovina on Sunday and in Poland next Wednesday night.

‘We struggled at the beginning, definitely, but we came into the game better after going 1-0 down,’ said De Boer.

‘In the second half we defended deeper and challenged more for the ball and we were able to be much more dangerous. That was the difference between the first and second half.

‘Of course I’d like to get my first win, but let’s do it against Bosnia.’