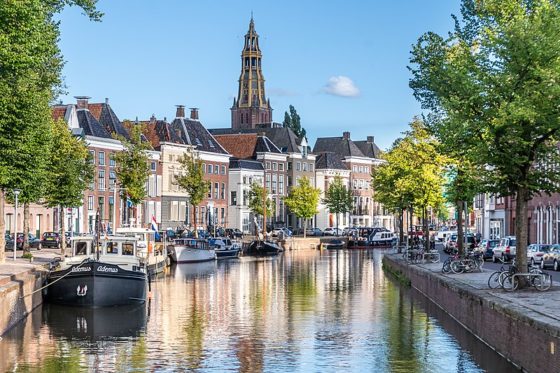 Groningen is top of a new list of the healthiest Dutch cities compiled by civil engineering group Arcadis.

Groningen, the list compilers say, has benefited from largely banning cars from the city centre, encouraging cycling and walking, limiting the development of high rise flats and offices and combating noise and air pollution.

By contrast, the big cities like Amsterdam, Rotterdam and The Hague are well down in the ranking, mainly because of high levels of both air and noise pollution.

Nijmegen, Maastricht, Almere and Amersfoort complete the top 5 in a list of 20. Amsterdam was in 17th place, Rotterdam in 19th and The Hague in 15th.

The aim of the ranking is not to create a hierarchy of elite cities, but to highlight areas where cities can optimise their physical environment to the benefit of their citizens, Arcadis climate group director Marjan den Barber said.

The index was already being compiled before coronavirus hit, but the pandemic itself has highlighted the need for healthy cities, she said. ‘While much remains to be researched, it appears that basic human health plays a major role in susceptibility to coronavirus,’ she said. ‘A well thought-out city contributes to having a healthy population.’

The biggest Dutch cities are also at the bottom of a new list of prosperous places to live in the Netherlands drawn up by national statistics agency CBS.

While the cities are wealthier in terms of money, they are often dirtier and less safe and their residents are generally more unhealthy than country dwellers, the CBS said.

There are exceptions to the rule, the CBS said. More rural areas such as Bloemendaal, Bergeijk and Midden-Delfland are both wealthy, clean and safe, with low unemployment and healthy locals.

By contrast, people living in villages in northern Groningen such as Veendam, Oldambt and Stadskanaal are likely to have low incomes and be faced with a relatively high crime rate, the CBS said.