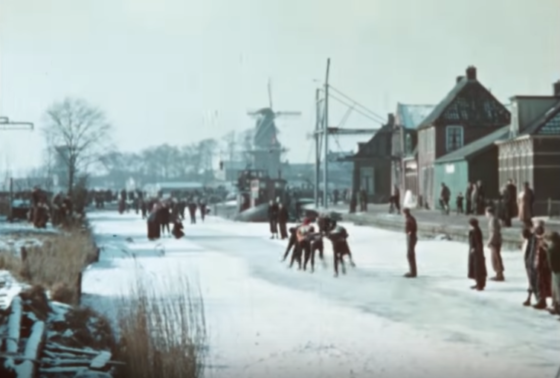 The 200 kilometre ice skating marathon Elfstedentocht will not go ahead this winter because of coronavirus, the organisers have said.

It is usually the weather which shatters the expectations of those lucky enough to have obtained a starting permit for the race ,which was last held in 1997.

This time around the ‘race of races’ which takes in the 11 cities of Friesland via lakes and canals will even more definitely not take place, even if the ice reaches the regulatory thickness as measured by the ice masters.

It would not be possible to organise the race in a safe way because of the social distancing rule, Wiebe Wieling, chairman of the organising committee De Friesche Elf Steden told broadcaster NOS. ‘If things stay as they are we cannot organise a race with up to a million and a half visitors and 24,000 skaters jostling for position at the start,’ he said.

And then there’s the weather.

‘We need ice, and there’s no ice,’ Wieling said.

It is unlikely there will be ice, weather forecaster Weeronline said. It is predicting a mild winter, with the coldest spells in December.

Dutch winters have been growing progressively warmer over the last 50 years, weather bureau KNMI said, and as long as climate change continues, cold winters will become even more rare.

But if winter does strike despite forecasts to the contrary, the Elfstedentocht would still not go ahead. ‘A shame but understandable’ speed skating champion and Frisian Sven Kramer told the broadcaster. ‘I have a skating heart as have many in the Netherlands but we are dealing with something bigger here.’

In February this year the oldest colour footage of the now almost mythical race was discovered, dating from 1954.