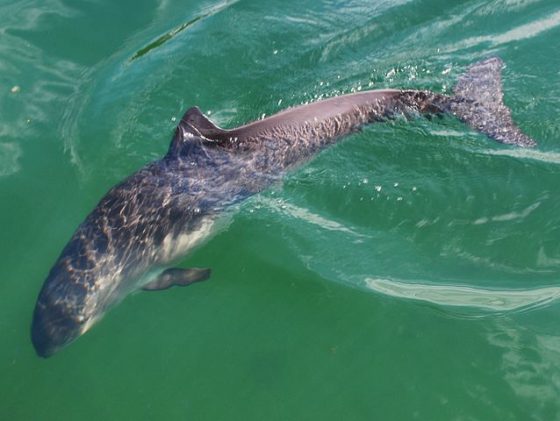 The porpoise population in the Dutch part of the North Sea has increased seven fold since 1991, according to research by national statistics agency CBS and Wageningen University.

One reason for the increase has been the general movement of porpoise populations from northern parts of the North Sea towards the south, the researchers said.

‘Porpoises were abundant in the Netherlands till they disappeared mid 20th century but returned in the late 1980s and early 1990s,’ Steven Geelhoed from Wageningen Marine Research told DutchNews.nl.

‘The total North Sea population has remained at the same level since 1994 so porpoises shifted from the northern North Sea to the heavily used southern part of the North Sea. The reasons are unclear, but a link with food availability seems logical although we can’t quantify this.’

To count porpoise, the team use a plane along predesigned transect lines to cover the entire Dutch North Sea. ‘We only fly with good weather but off course you miss animals that are submerged,’ Geelhoed said.The team use data from tagged animals and other techniques to try to compensate for the animals that are missed.

As the number of porpoise rise in the Dutch part of the North Sea the number of strandings had gone up considerably, with 980 recorded in 2012, although this had fallen to 320 by last year.

Causes of death established in stranded porpoise include drowning in fish nets, infections, starvation and collisions with ships’ propellers.

The porpoise was removed from the list of most threatened Dutch species earlier this month.