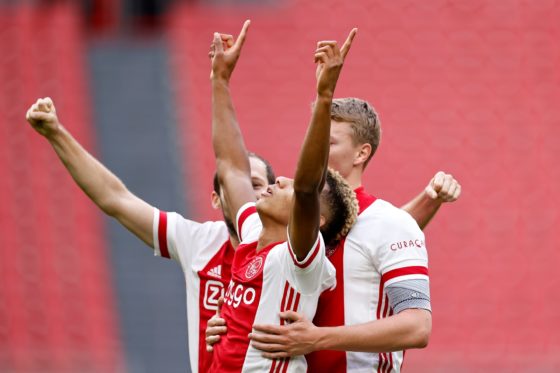 Ajax went two points clear at the top of the Eredivisie with a routine 5-0 win over Heracles Almelo as Vitesse Arnhem dropped points in Groningen.

Ajax were ahead after just five minutes when David Neres’s deflected cross fell at the feet of Larissa Traoré, who fired home from eight yards. Further strikes by Neres and Zakaria Labyad put the Amsterdammers firmly in control by half-time, while Dusan Tadic and Labyad with his second goal completed the scoring.

However, Labyad and midfielder Davy Klaassen face a battle to be fit in time for Wednesday’s Champions League match at home to FC Midtylland after they picked up injuries during the game.

‘At the moment it looks like it might be OK, but we’ll have to see how it develops over the next 24 hours,’ said coach Erik ten Hag.

Vitesse took over at the top of the table for 24 hours with a 1-1 draw in Groningen on Saturday, but Armando Broja missed a golden chance to take all three points back to Arnhem when he skewed wide of an open goal.

Groningen took the lead after half an hour when Patrick Joosten drifted in from the left flank and unleashed a dipping shot from outside the penalty area, but Vitesse levelled just before half-time as Loïs Openda took advantage of some flat-footed defending to prod home from a close range.

Feyenoord moved up to third place with a gritty 3-1 win at bottom side Fortuna Sittard. The Limburgers took the lead after 31 seconds through Zian Flemming and Feyenoord’s challenge intensified when Orkun Kökcü was dismissed after just 12 minutes for a heavy tackle. Marco Senesi levelled the scores with a flashing half-volley into the corner before Steven Berghuis scored a penalty at the end of each half to complete the comeback.

Dick Advocaat’s side overtook both Twente Enschede and PSV, who played out a 1-1 draw. PSV looked to be cruising after they went 1-0 up through Donyell Malen, but passed up a hatful of chances, including a penalty miss by Eran Zahavi, and paid the price when Danilo converted a spot-kick on 63 minutes.

A change of coach brought no relief for ailing ADO Den Haag as Ruud Brood saw his side go down 6-0 at Sparta. After Lennart Thy put Sparta ahead just before half-time with a turn and shot, ADO capitulated in the second half, conceding three goals in a six-minute spell before substitute Mario Engels profited from two defensive blunders late on.

Emmen are still seeking their first win of the season after Bruno Martins Indi’s first Eredivisie goal for seven years gave AZ Alkmaar an unconvincing win against the side from Drenthe, who had Lucas Bernadou sent off after an hour for a clumsy challenge on Jonas Svensson.

Willem II claimed the spoils against VVV Venlo in the battle of the Greek strikers. Vangelis Pavlidis put Willem II ahead early on while Georgios Giakoumakis replied for VVV on 34 minutes, but Görkem Saglam’s precise curling shot on 18 minutes proved the difference for the home side.

RKC Waalwijk had to settle for a point at home against Heerenveen despite playing the second half with an extra man following Sieben Dewaele’s dismissal. The visitors led at that point through Henk Veerman’s eighth goal of the season, but RKC’s pressure paid off when Vitalie Damascan smashed in from close range with 10 minutes left.