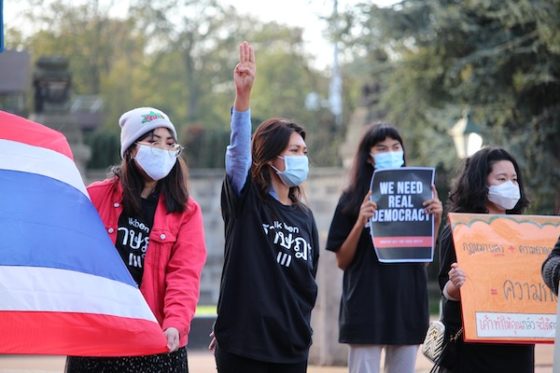 A group of 20 Thai protesters gathered in front of the Peace Palace in The Hague on Thursday afternoon to raise awareness about the struggle for democracy in Thailand.

Political unrest in Thailand has increased over the past few months, with tension escalating after tens of thousands took to the streets in Bangkok last week to demand reform of the Thai monarchy.

Organiser Nalinee (27) said she had decided to get involved because she could no longer sit back and do nothing.

‘I live a good quality of life here in the Netherlands while I watch [the protesters] fight for justice in Thailand,’ she said. ‘What’s going on in Thailand will benefit me as well because they call for freedom of expression, democracy, and justice… So I organised the demonstration to tell them that I want to support them. We want the world to know, we want the world to stand with us.’

Another protester, a 26-year old student who wished to remain anonymous, said people have realised that they don’t have a voice.

‘They can speak, but they can’t reach the authorities in Thailand,’ she said. ‘No one listens to their demands. (…) The constitution gives absolute power to the king, and this is the problem because we are actually in a constitutional monarchy’.

The protest featured bright banners in Thai and English, and participants wore customised t-shirts that read ‘I am a citizen’ in Thai. To express their solidarity, protesters used the same three-fingered salute inspired by the film The Hunger Games, and that their countrymen use to symbolise resistance and liberty. Some 5,000 Thai nationals live in the Netherlands.

Luket (27), who was watching the demonstration, criticised the protesters back home for not basing their actions on facts, and for being too harsh on the current king, who is believed to spend most of his time in Germany. ‘Many Thai people still love their monarchy,’ she said.

‘I also think the current king must reform the system,’ she said. ‘He should go back to Thailand and stay with the people there. But using words like “death to the king” – as has reportedly been said in Thailand – is not good.’

For some of the protesters, not being able to participate in the demonstrations in Thailand has been frustrating. And while the Netherlands may provide a safe space to voice opinions, the protesters are well aware that the authorities have eyes everywhere.

‘Maybe we can use the privilege of being here in the Netherlands to speak out,’ said Nalinee. ‘But it’s a risk, because if we speak out here, we cannot go back to Thailand anymore. So that’s kind of the dilemma that I’m constantly dealing with’.