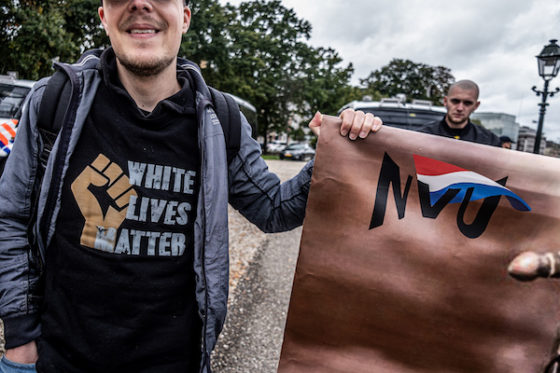 The Dutch counter-terrorism unit NCTV is warning that there is a continuing risk of extreme right-wing violence in the Netherlands, as the number of online threats in particular rise.

Since the coronavirus outbreak, ‘people who have long distrusted the government, science and traditional media may find their views confirmed in conspiracy theories and misinformation,’ the NCTV says in its latest update.

Besides the relatively broad, mixed activist upper layer, ‘there is a radical undercurrent with sometimes extremist behavior, such as harassing journalists and politicians or intimidating police officers.’

The new generation of far right agitators, who grew up with internet, will not join traditional far right groups, but gather extremist ideas online, the agency said.


‘It is precisely the limited attraction of known small right-wing extremist groups that can lead to the online radicalisation of Dutch people under the radar. This can contribute to the development of a social ecosystem, in which the threshold for discussing violent actions is low.’

The warning was issued shortly after parliamentary chairwoman Khadija Arib said she is extremely concerned about the rise in online attacks made against politicians, and the daily demonstrations outside parliament.

In the first eight months of this year, politicians have made 44 reports and 17 formal police complaints about threats, Arib told Nieuwsuur on Thursday evening.

Parliamentary staff and visitors often now avoid using the main entrance to the complex because of the ‘ugly atmosphere’ outside. The demonstrators ‘harass MPs, touch them, and they jeer at journalists and politicians,’ Arib said.

Broadcaster NOS has also said it will stop using outside broadcast vans with its logo because of the verbal attacks on journalists. ‘It is not just about what has happened, but about the fear of what might happen,’ NOS editor in chief Marcel Gelauff told current affairs show EenVandaag.

NOS journalists are no longer allowed to cover demonstrations without security guards, he said. ‘It is shocking how low we have sunk,’ he said. ‘Everything has changed in such a short space of time.’

Far right political parties Forum voor Democracie and the PVV have repeatedly attacked the media for being ‘part of the elite’, but FvD leader Thierry Baudet told Nieuwsuur on Thursday he considered it ‘extremely unlikely‘ that his criticism had led to the current situation.