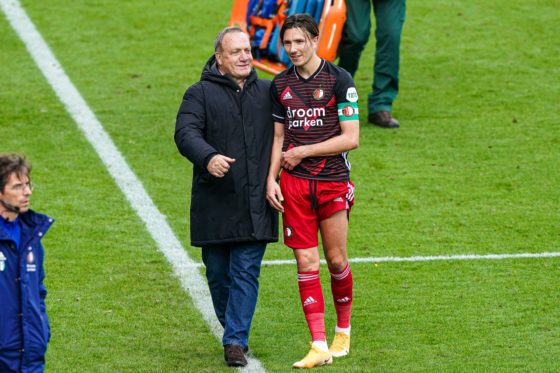 PSV Eindhoven joined Feyenoord and Heerenveen at the top of the Eredivisie after labouring to a 2-0 home win over Fortuna Sittard.

Donyell Malen opened the scoring in the fifth minute, running on to Eran Zahavi’s perfectly weighted pass and threading the ball between goalkeeper Alexei Koselev and defender George Cox. PSV then had four goals disallowed, two on the advice of the VAR panel, before Noni Madueke added a late second.

Feyenoord top the table on goal difference, but had to come from behind in Tilburg after Vangelis Pavlidis volleyed home from a corner in the 13th minute. Ridgeciano Haps equalised nine minutes later before Bryan Linssen’s first goal since his summer move from Vitesse and a pair of clinical finishes by Steven Berghuis glossed the scoreline.

Heerenveen also surrendered their 100% record with a 1-1 draw in Utrecht. The Frisians went ahead early through Henk Veerman and came close to doubling their lead shortly afterwards when Joey Veerman hit the bar, but Gyrano Kerk equalised just before half-time and Heerenveen had to settle for a point after substitute Rein Smit was sent off.

The teams at the top profited from Ajax’s defeat in Groningen, the first time the champions have dropped points this season. Remco Balk marked his first-team debut with the only goal of the game, poking a rebound home at the near post in the 49th minute.

The most remarkable game of the weekend saw Sparta come back from 4-0 down at home to earn a point against AZ. The match looked to be dead and buried when Dani de Wit scored his second goal and the visitors’ fourth after just 33 minutes. Captain Teun Koopmeiners even squandered a chance to make it five from the penalty spot when he hit the bar.

Abdou Harroui and Dirk Abels reduced the arrears after half-time, but the late drama came when AZ goalkeeper Marco Bizot was shown a second yellow card for bringing down Aaron Meijers in the 88th minute. Lennart Thy converted the penalty before Sven Mijnans fired an equaliser past Hobie Verhulst in injury time.

ADO Den Haag chalked up their first win of the season in Venlo with a 93rd-minute winner from German debutant David Philipp. The score was 1-1 after just four minutes as VVV’s Giorgos Giakoumakis scored with a spectacular scissor kick to equalise Shaquille Pinas’s opener.

Vitesse Arnhem continued their good early season form with a comfortable 3-0 home win over Heracles, with goals from Loïs Openda, Oussama Darfalou and Oussama Tannane, while Emmen doubled their points tally with a draw in Enschede. Vaclav Cerny gave Twente the lead just after half-time but Michael de Leeuw equalised for the Drenthe side after 65 minutes.

The match between RKC Waalwijk and PEC Zwolle was postponed after four RKC players and two members of staff tested positive for coronavirus.