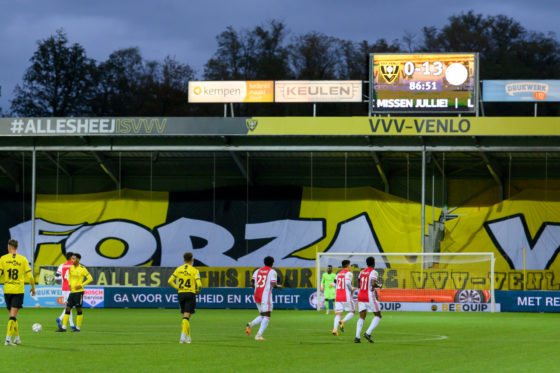 Ajax stirred up a storm in the football world and on social media at the weekend with their 13-0 trouncing of VVV Venlo.

Commentators praised the champions’ “hunger” as they racked up nine goals in the second half. The deluge was triggered by the dismissal of VVV’s captain Christian Kum for a high tackle on Brazilian winger Antony.

German football magazine Kicker put the blame on VVV’s ‘dramatic’ collapse on their ‘incredibly passive’ defending in the second half, with only second-choice goalkeeper Delano van Crooij, who made 10 saves, standing in the way of an even bigger margin.

The reaction of Klaas-Jan Huntelaar to scoring the 10th goal from the penalty spot in the 76th minute was seen as emblematic of Ajax’s ruthless approach, as the substitute grabbed the ball out of the net and ran back to the centre circle in pursuit of more goals.

‘This is top-level football and you need to keep going,’ said Ajax coach Erik ten Hag. ‘It’s automatic in our team, they showed the hunger you want to see from players. Now we need to draw a line under it and move on.’

There was praise on social media for the phlegmatic response of VVV Venlo’s official account during the second half, as it came to terms with the crushing reality with a series of GIF images.

Ajax goalkeeper Andre Onana was praised for his gesture after the game as he ran straight to his opposite number and put a consoling arm around his shoulder. ‘I can’t remember what Onana said,’ said Van Crooij. ‘I felt so devastated. All I was thinking was: “I want to go inside” and “Please let’s avenge this soon”.’

‘I did everything I could,’ the 29-year-old goalkeeper added, ‘but the Ajax players kept coming towards my goal. They were unstoppable. It was like a training session for them.’

😲 Ajax’s Andre Onana didn’t have one shot to save as his side put THIRTEEN past VVV-Venlo’s Delano van Crooij.

👏 But his first job at the full-time whistle…

Ajax’s win surpassed their own record from May 19, 1972, when they beat Vitesse Arnhem 12-1 in their old De Meer stadium. Johan Cruyff scored four and Johan Neeskens and Dick van Dijk both bagged hat-tricks in a match which also stood at 4-0 at half-time.

The match was also the 10th anniversary of another famous Eredivisie thumping, when PSV beat Feyenoord 10-0 on October 24, 2010. Despite their early-season domination PSV faded in the league and finished third behind Ajax and FC Twente.

Not all records were swallowed up in Ajax’s goal tsunami: their 9-5 defeat by Feyenoord in De Kuip on August 28, 1960, remains the highest scoring match in the Dutch professional league.