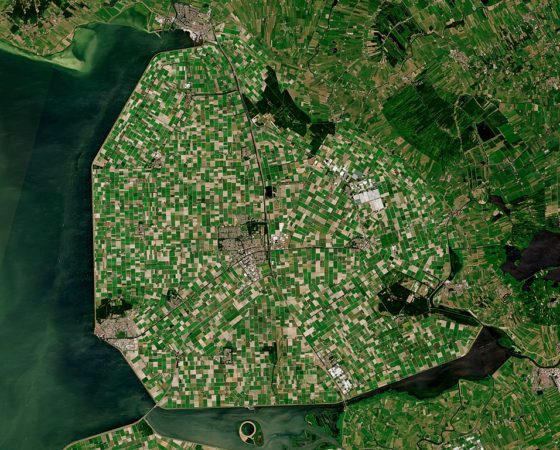 A satellite image of the Noordoostpolder. Photo: Copernicus Sentinel-2, ESA

A study of the north-eastern part of the Noordoostpolder – an area of reclaimed land north east of Amsterdam – has yielded the approximate locations of four lost medieval peat islands.

Sources from the early Middle Ages mention four settlements thought to have originated in the 10th and 11th centuries when people started to farm what was then an area of peat soil. So far it was never clear where these might have been.

In the late Middle Ages part of the area now known as the Noordoostpolder was flooded and the inland sea Zuiderzee was formed, swallowing up the four ‘drowned’ villages of Marcnesse, Nagele, Fenehuysen I and Feneguysen II.

Maritime archaeologist Yftinus van Popta started his five year search by charting all the archaeological objects found in the Noordpoostpolder. Until then it was thought that the finds –  bricks, roof tiles, bones and earthenware – had fallen off passing ships.

But to Van Popta the objects signified human habitation. ‘Bricks are remnants of houses, the bones came from the meat people ate and the earthenware shards came from cooking pots,’ Van Popta told broadcaster Nos.

Further digging based on satellite imaging showing evidence of human activity, such as ditches also revealed that the concentrations of comparable finds of bricks, shards and bones were similar to that of surviving peat island settlements like Urk and Schokland.

Pinpointing the exact location of the lost villages is difficult because possible remnants in the soil have severely deteriorated. Further investigation of old maps and historical sources may help Van Popta to start a more focused search for more evidence, such as pits and foundations.

Thanks to the efforts of Van Popta, who is taking his PhD on Thursday, the area now has protected status. Any building work in the area will be subject to prior archaeological investigation and ploughing is restricted to a depth of 30 centimetres.

‘We have found a lost piece of the Netherlands. I was convinced it was there but then you have to prove it. It’s nice to know I haven’t spent five years working for nothing,’ Van Popta told the broadcaster.