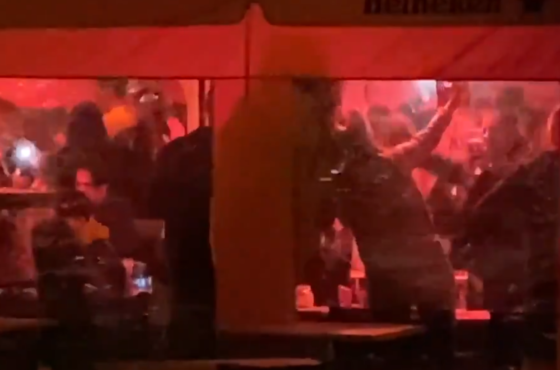 Screenshot from the video. Courtesy BBC

The Hague local council is looking into the possibility of prosecuting a group of revellers who had a party just meters away from parliament, where politicians were discussing the government’s coronavirus policy.

Footage captured by BBC correspondent Anna Holligan showed a party tent packed with people while loud music played, just 25 minutes before cafes and restaurants were due to shut for a four week period.

Police intervened around 10pm but no fines were handed out. The Hague mayor Jan van Zanen branded the event ‘totally irresponsible’.

Countdown to partial lockdown. Scene in The Hague 25 mins before new rules kick in #COVID19 pic.twitter.com/fRJkbpLaKd

‘These people don’t give a damn about the hardworking people who work in care, or the patients who are in intensive care or whose operations are being postponed. People want to party, that is understandable, but this sort of selfish behaviour will only lead to a longer period of measures. They are harming themselves and people with businesses,’ Van Zanen said.

The owner of the bar in question may also be prosecuted, The Hague local council said.

PvdA leader Lodewijk Asscher called attention to the party during the debate and called the participants ‘louts’. ‘It shows we have a long way to go if we are to deal with this virus together. This is giving the finger to all the entrepreneurs who are suffering the consequences of this,’ Asscher said.

Politician also took to Twitter to condemn the event. ‘Unacceptable. Keep to the rules and do it for others!’ defence minister Ank Bijleveld said.

Dirk Beljaarts, head of the hospitality industry association Horeca Nederland, said the party had damaged the ‘carefully restored status of a safe environment in bars and restaurants’.

‘This is not the image we want to project at this time. It is unacceptable when businesses have given their all in the last two months to offer a safe place to people,’ Beljaarts told the Telegraaf.

Cafe owner John Prins told broadcaster NOS later that ‘I cannot put right what is wrong, but I do think things have been taken out of context.’

Prins said he had put the music out at 9.30pm because his customers could not be controlled. ‘We are not a party café at all,’ he said. ‘I am so embarrassed for my parents.’

People were calling for last rounds in many other cities too, with some bars advertising special lockdown offers to ‘empty the barrels’.

Bars and cafes were ordered to close their doors for at least four weeks on Tuesday in an effort to stop the spread of coronavirus.