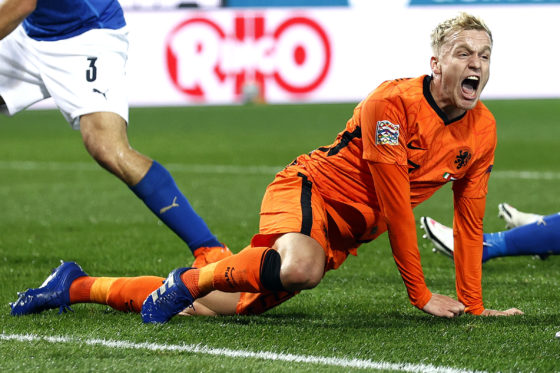 The Netherlands kept their chances of progressing in the Nations League alive with a well-earned point against Italy in Bergamo.

Frank de Boer is still searching for his first win after four games as manager, but his team looked far more assured and incisive than they did in the goalless draw against Bosnia-Herzegovina on Saturday.

Oranje had the better of the opening exchanges, with Frenkie de Jong’s passes stretching the Italian defence, but went behind after 16 minutes when Lorenzo Pellegrini converted Nicolo Barella’s pass.

Eight minutes later De Jong slid a diagonal ball into the path of Daley Blind, who cut back for Memphis Depay on the penalty spot. Depay’s shot cannoned into Donny van de Beek and the midfielder reacted fastest to poke the loose ball home.

Galvanised by their first goal in 323 minutes, the Dutch pressed forward and twice came close to snatching the lead via the head of Luuk de Jong.

Depay and Georginio Wijnaldum had good chances immediately after the break as Oranje continued their good form. At the other end a mistake by Hans Hateboer let in Ciro Immobile, but Jesper Cillessen came out smartly to block the shot.

The Italians took control of the match after that as substitute Alessandro Florenzi provided an extra cutting edge on the right, though Oranje could have tested Gianluigi Donnarumma’s goal had Frenkie de Jong not overhit his cross to an unmarked Depay.

In the closing minutes Wijnaldum dragged a shot wide after breaking through on the left, while Cillessen had to race out of his goal to deny the onrushing Moise Kean in injury time.

Captain Virgil van Dijk acknowledged that the performance was far better than in Zenica. ‘We were good at times, well organised and worked really hard together. Maybe we could have done better on the counter-attack,’ he told NOS. ‘It was a good performance that we can build on for next time.’

The Dutch are third in Group 1 with five points from four matches, with the remaining matches at home to Bosnia on November 15 and away to current leaders Poland on November 18.