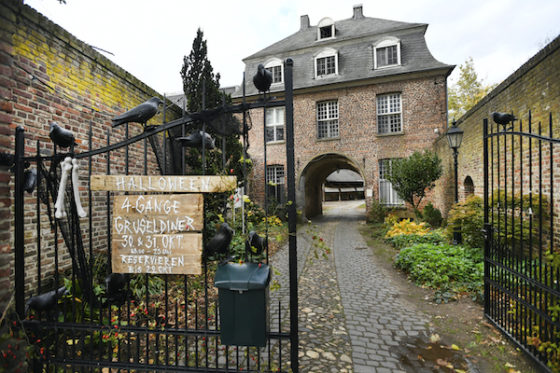 The entrance to the complex where the raids took place. Photo: Piroschka van de Wouw ANP

German police have arrested a 58-year-old Dutch national and alleged sect leader following raids on the group’s commune in Asperden, just over the border near Nijmegen, Dutch media said on Thursday.

The arrest of the man, who calls himself a prophet, follows reports that a young woman had been kidnapped and kept a virtual prisoner on the property, a former monastery with extensive grounds.

Police found 54 people living at the property, including 10 children, when they entered the property on Wednesday. The woman, who is said to be Dutch and aged 25, is currently being questioned.

The complex is home to a branch of the so-called Orde der Transformanten, a religious movement founded by a group of dissident Protestants and Catholics in Brabant in 2003 and led by Dutchman Robert Baart. The aim of the group at the time was to return to the way the first Christians lived.

The group has also hit the headlines several times. In 2014, a member of sector was found guilty of attempting to murder a former member.

In 2012, two other members were found not guilty of attempting to murder a Rotterdam businessman in 2008. He was having a relationship with a member of the group and said the attack had been organised in revenge.

According to the Telegraaf, the woman who was taken from the complex was ‘kicking and screaming’ as she was carried out.

Dutch national Camiel Engelen, who owns the monastery, told the paper that the woman was not being held against her will and that she had her own room.

The group are open to the outside world and tens of thousands of people visit the monastery, which also hosts events every year, Engelen said.