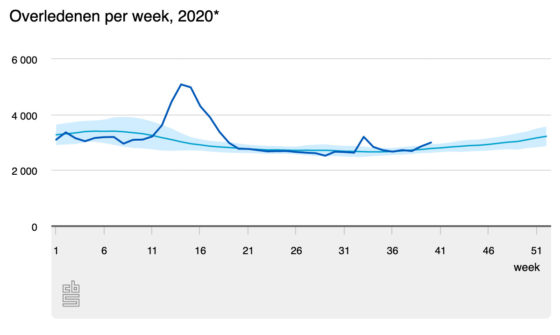 Deaths per week, with the forecast number in paler blue

There was a slight rise in the excess death rate in the Netherlands in the week to October 4, which could indicate more people than thought are dying of coronavirus, national statistics agency CBS said on Friday.

In total, 2,998 deaths were registered that week, some 200 up on predictions based on previous years. The week before there were 100 more deaths than forecast.

According to official figures from national health institute RIVM, 76 and 66 people officially died of coronavirus during the same two week period.

The figures, which are still preliminary, indicate that the over-80s were most likely to die. However, unlike during the first wave, they were not living in nursing homes or other sheltered accommodation, the CBS said.

The Dutch excess death rate rose sharply at the start of the pandemic but had dropped away by May.

The CBS said at the beginning of this month over 10,000 people died of coronavirus in the Netherlands during the first wave.

The official death toll – based on people who had been tested for the virus – was around 6,100 up to the end of June.

The October figure is based on death certificates which had been completed by a doctor. In total, 10,067 died from coronavirus up to the end of June, of whom 53% were male, and nearly all were over the age of 75, the CBS said.

Some 60% of the victims were living in long-term care homes, either because they were very elderly, had chronic health conditions or were disabled.