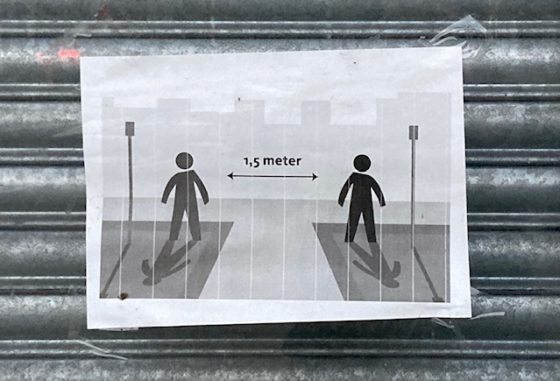 The number of coronavirus cases was above 8,000 for the third day running on Tuesday, but there are signs the second wave is levelling off.

Another 8,182 cases were recorded in the 24 hours to 10am, according to the latest figures from the public health agency RIVM, an increase of 171 on Monday’s figure.

On Sunday the RIVM announced 8,184 cases, but the figure was later cut by seven and today’s number is also likely to be adjusted by a small amount.

In the last seven days 55,587 Covid-19 infections were reported to the RIVM, 27% more than in the previous week. It follows six straight weeks in which the number of recorded cases has increased by between 40% and 60%.

‘The number of new recorded cases appears to have increased less rapidly than a week earlier,’ the RIVM said in its weekly press release. ‘This may be an effect of the measures taken since the end of September. Next week we will be able to see if this trend is sustained.’

However, the positive test rate rose again from 13.6% to 14.4%, partly because 3% fewer tests were carried out in the last week.

Of the 25 regional safety council areas, Amsterdam-Amstelland had the highest concentration of infections, with 502 per 100,000 residents in the last seven days, followed by Rotterdam-Rijnmond (398) and Utrecht (394). Zuid-Limburg had the lowest frequency with 119.

The number of patients in hospital rose in the last 24 hours from 1738 to 1859, of whom 419 are in intensive care. On Nieuwsuur on Monday Ernst Kuipers, head of the national patient co-ordination centre LCPS, said ICU numbers were likely to keep rising until the start of November.

Another 185 people were reported to have died from Covid-19 in the last week, a weekly increase of 35. Some deaths are not recorded in the figures until several weeks later because of administrative delays.

The reproductive number R, which represents the rate at which the virus is spreading, was calculated at 1.22, a marginal decline from last week’s figure of 1.27. The number needs to be below 1 for infections to fall. The RIVM estimates that between 92,000 and 161,000 were infected on October 8.