The number of newly notified positive coronavirus tests in the Netherlands soared by a further 7,393 cases in the 24 hours to Tuesday 10am, health officials said.

There were nearly 44,000 newly registered cases of coronavirus in the past week, a 60% rise on the week earlier period, according to the public health institute RIVM’s weekly update.

In total, 150 deaths were reported, compared with 89 in the previous seven day period, while the number of people being treated in intensive care rose from 121 to 192. Hospital admissions were up 40% on the week and the positive test rate rose from 10.4% to 13.8%.

‘The virus is continuing to spread without let up,’ the RIVM said. ‘There is no effect to be seen from the national measures taken on September 29 and there is no stabilisation in the number of positive tests.’

The government is due to announce a new get tough approach to combating the virus on Tuesday evening which may include a total closure of cafes, bars and restaurants.

‘The number of infections is increasing across all age groups,’ the RIVM said. ‘The largest group of people with a positive test result per 100,00 people remains 18 to 24-year-olds. 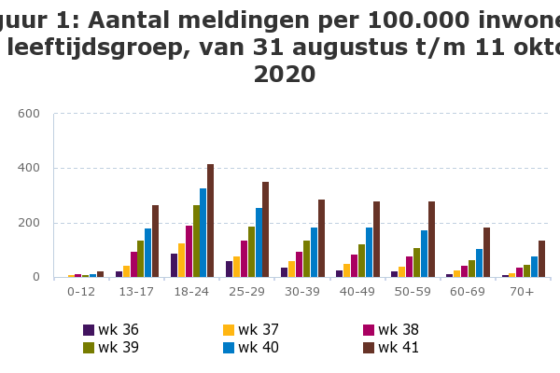 Infections per age group for the past six weeks

The Volkskrant has a leaked copy of the ‘route map’ which outlines how the spread of the virus should be contained in the coming days, and which is likely to be the basis of tonight’s crunch announcement.

Prime minister Mark Rutte said last Friday that the Netherlands planned to work with a route map to deal with the second wave of the virus.

The document lists the measures which should be taken at each of four risk levels, and shows that the Netherlands is nearing the ‘very serious’ category, the paper said.

Meanwhile, European foreign affairs ministers have voted in favour of coordinating responses to restrictions in free movement within the EU in a bid to end the chaos of overlapping measures and travel curbs.

The measures state that member states should provide the European Centre for Disease Prevention and Control (ECDC) with weekly data covering newly notified cases, the testing rate and percentage of positive tests.

These will then be used to colour-code a map of Europe which, the council says, will ‘support member states in their decision-making.’ The map will consist of four colours – green, orange and red, with grey for countries where there is insufficient information or a low test rate.

‘The decision on whether to introduce restrictions to free movement to protect public health remains the responsibility of member states,’ the council said in a statement. ‘However, coordination on this topic is essential.’