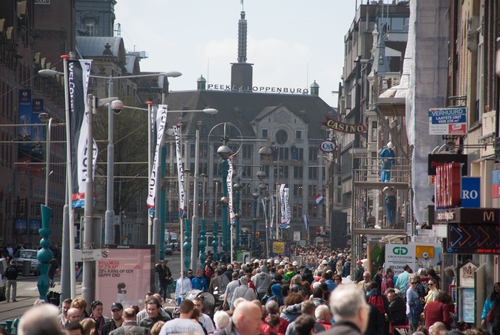 Access to housing, transport and public facilities in Dutch cities is declining for people on low incomes, the Council for the Environment and Infrastructure (RLI) said in a new report on Thursday.

For example, the report said, living in the city is becoming increasingly expensive for tenants and families who want to buy a home. ‘At the same time, public facilities in cities have become impoverished, as a result of which some groups have poor access to relevant facilities such as care, a library, sports or a welfare centre,’ the report said.

‘Public transport is expensive, many connections have become worse, not everyone can afford a car, and cycling is not always an option.’

The current lack of access to cities is not only affecting traditionally disadvantaged groups, (such as people with a low income or social security benefits) but people with middle incomes, flex workers and the self-employed, the council said.

The RLI, an important government advisory group on planning and infrastructure issues, says officials should consider the impact of new policy on all city dwellers’ access to key services.

For example, the assessment of major developments should include a focus on the likely effect on public services, transport and housing at the planning stage, the council said.

Better use should be made of the current housing stock, by relaxing the rules on home sharing for people on welfare benefits and making more efficient use of the space in both rental and owner-occupier homes. Efforts should also be made to stabilise rents in the non-rent controlled sector.

In particular, the report said, officials should not over-estimate peoples’ ability to cope with complex issues by placing too much emphasis on self-reliance.

‘The city is much more complicated than it looks,’ spokesman Niels Koeman told the Parool. ‘If hospitals merge, then that causes problems for some people. They have to travel further, but they may not have a bike and public transport may not be an option either.’

‘Equal access to the cities should be paramount, Koeman said. ‘It should be something that policymakers take into account in every decision they make.’