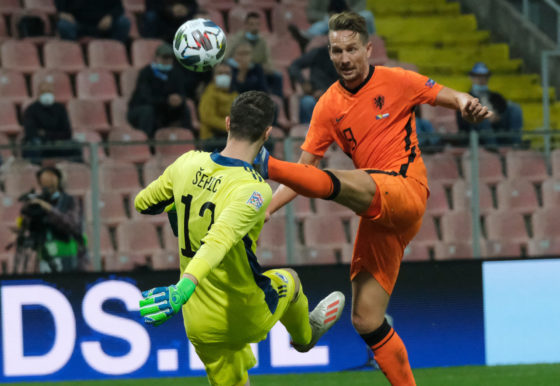 The Netherlands’ chances of progressing in the Nations League suffered a setback as they could only manage a goalless draw against Bosnia-Herzegovina.

The result leaves Frank de Boer still seeking his first win as national team manager. Defeat in the next match in Italy on Wednesday night will leave the Dutch needing to win both their last group games at home to Bosnia and away to Poland.

‘The tempo in the first half was too low,’ captain Virgil van Dijk told NOS. ‘We couldn’t break through or create any problems for them on the counter.

‘In the second half we went after the game, applied more pressure, we were better organised and moved the ball a bit quicker. But we still didn’t have any really good chances and that’s disappointing. We should be winning here.’

The Netherlands posed little threat to the home team’s goal in an insipid first half in Zenica, while Bosnia’s best chance was a counter-attack after 12 minutes that was shut down by an alert Stefan de Vrij as Amer Gojak shaped to shoot.

Oranje’s best chances came in the last 15 minutes. First Frenkie de Jong ran on to a spooned pass by Quincy Promes only to see his close-range shot saved at the near post by Ibrahim Šehić. From the resultant corner the Bosnian goalkeeper dived to his left to palm out a header by substitute Luuk de Jong.

Ryan Babel missed a gilt-edged chance to snatch the match in the 90th minute when he flashed a shot over the bar while unmarked in front of goal.

The Dutch have failed to score in their last three matches, their longest goal drought for the national team since 2009 when Bert van Marwijk was head coach.