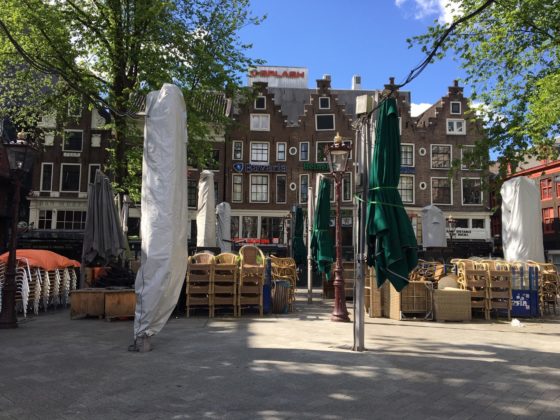 Cafes and bars which end up in financial difficulty because of the new four-week shut-down cannot count on the financial support of their banks any longer, Chris Buijnink, chairman of the Dutch banking federation told broadcaster NOS.

‘It is in no-one’s interest, not even that of the cafe owner, if they continue to get into debt with no real future,’ he said. ‘It is hard and it is difficult. I feel for people, but this is the sensible way which we, as banks, help other companies.’

Early in the crisis banks agreed to a six month moratorium on payments for thousands of small firms, and private individuals could also ask for a halt to mortgage and loan repayments.

The Dutch central bank said on Tuesday that Dutch banks are well positioned to weather the coronavirus crisis, and can take far more losses before the end of their reserves is in sight.

And banks do want to continue helping people, Buijnink said. ‘But it has to be companies which have future prospects, which are essentially healthy.’

Employers organisations VNO-NCW and MKB Nederland say new government help will be inevitable in several sectors following the introduction of a partial lockdown and prime minister Mark Rutte did say on Tuesday evening that there would be more help for companies under the existing schemes.

‘The cabinet has to take measures to try to stop the spread of the virus, but it is an enormous blow to companies,’ said Ingrid Thijssen, chairwoman of the biggest employers association VNO-NCW. It is crucial, she said, that sectors which are ‘being repeatedly hit, like hospitality, events and transport get extra support.’

In the first instance, a ‘time-out’, giving employers the option of temporarily freezing their operations would help some avoid bankruptcy, Thijssen said. In practice this would mean companies would not have to sell their equipment at rock bottom prices, but could close their doors until the virus is under control.

Sports clubs too are facing financial problems. All sports matches with more than four people have been halted temporarily although children can continue to play team sports but not travel to matches.

While professional football will continue, without supporters, the suspension will continue to cost the amateur game some €4m a week, Jan Dirk van der Zee, head of the amateur football at the KNVB, told broadcaster NOS.

Sports canteens were closed three weeks ago because players and supporters were not sticking to social distancing rules. ‘Some 60% of clubs are facing financial problems and that worries me enormously,’ he said.

Hotels and tourism will again be hard hit by the new rules and Roberto Payer, director of Amsterdam’s Hilton and Waldorf Astoria hotels, told the Financieele Dagblad that he can now send home the last of his staff.

The hospitality sector, he said, is now carrying the can for the irresponsible behaviour of others. ‘Many youngsters are failing to act responsibly,’ he said. ‘And we have to pick up the bill for them partying on, whatever happens. It makes me very angry.’