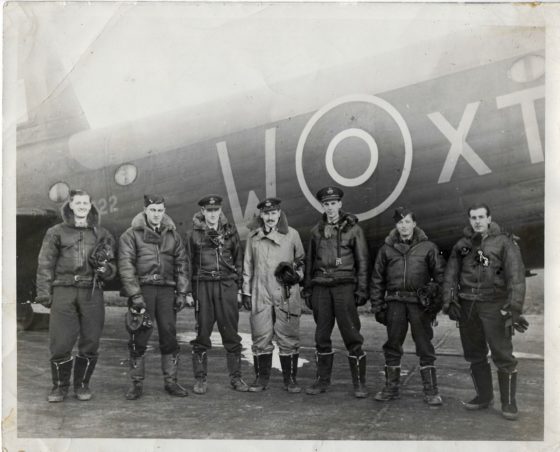 The crew of the BK716 Short Stirling bomber.

Recovery experts have identified a Second World War bomber lying on the bottom of the Markermeer near Amsterdam, resolving a 12-year-long mystery.

Defence ministry specialists are working with a private contractor to retrieve the wreckage of the RAF Short Stirling BK716, which was shot down in March 1943 with all seven crewmen on board.

The plane was long believed to be another Short Stirling, the BK710, based on forensic examination of an aluminium panel. It was first discovered in 2008 when a piece of its landing gear was brought up with the anchor of a stranded boat.

The volunteer Aircraft Recovery Group contacted the relatives of the BK710’s crew and began a campaign to recover the wreckage and bury the remains of the airmen, which included installing a memorial on Marken island.

But 10 years later the discovery of a cigarette case and a wooden mascot prompted a new investigation that identified the BK716 as a more likely candidate.

The recovery operation began on August 31 and is part of a programme funded by the Dutch government to recover around 30 aircraft which are believed to have human remains on board.

A spokesman for Almere city council said an engine part had been found during the first week of the search with the plane’s serial number stamped into it, establishing its identity beyond doubt.

‘The municipality of Almere is pleased with this result,’ said Hilde van Garderen, alderman responsible for culture. ‘It is confirmation for the relatives of the crew members.’

The pieces of the plane are thought to be strewn over an area of the lake bed measuring 75 metres squared, equivalent to nearly two football pitches. The sludge on the lake bed is being systematically dredged and sifted to reveal any objects larger than eight millimetres. The operation is expected to last around six weeks altogether.