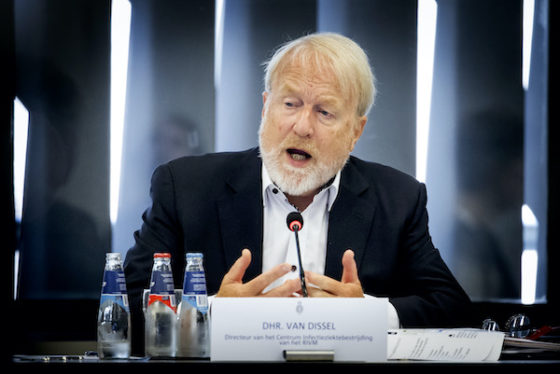 In total, 13,471 positive coronavirus tests were registered in the week to Tuesday morning, according to the latest update from the public health institute RIVM.

The new cases, a rise of 63% on the preceding seven day period, are largely concentrated in the provinces of Zuid-Holland, Noord-Holland and Brabant.

‘We are now at the tipping point,’  RIVM spokesman Jaap van Dissel told MPs in a face to face briefing. ‘The curve is rising.’

Asked if the measures announced by prime minister Mark Rutte last week, such as a 12pm curfew on cafes and bars were sufficient, Van Dissel said it would take a week to see if they have any effect.

Nevertheless, calls for stricter rules could be seen as a ‘wake up call’ which may have an impact on behaviour, Van Dissel said.

In total, 152 people were admitted to hospital during the week, up from 92 in the previous week, while the death toll more than doubled to 33.

Over 192,000 people had a coronavirus test last week, down slightly on the previous period, but the positive test rate rose from 3.9% to 6.1%.

With pressure on testing centres continuing to mount, some 10,000 people a day are currently finding it impossible to make an appointment, GGD chief Sjaak de Gouw told MPs. Capacity is currently around 28,000 tests a day.

In addition, most local health boards have now slashed the amount of contact tracing they are carrying out.

This means that while contacts are listed, only those considered to be at risk of developing a serious form of the virus are being contacted. This includes people in nursing homes, refugee centres, who have a cultural or language barrier or who work in healthcare or education.

In other cases, it is up to the person who has tested positive to alert their network.

‘The virus is spreading more quickly that we can scale up,’ De Gouw said.

In total, 17 of the 25 public health boards have now adopted this approach, including all the six regions which are now subject to extra measures.