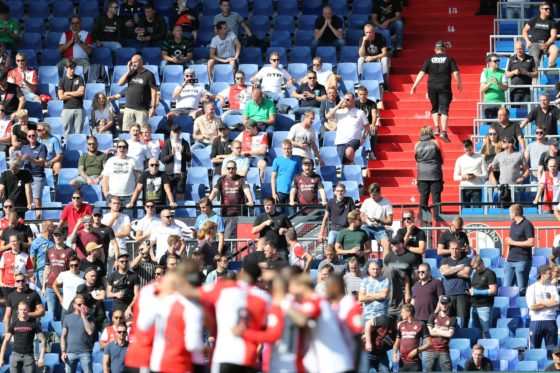 Prime minister Mark Rutte has told football fans to ‘keep their mouths shut’ at matches after supporters at several weekend games ignored the ban on chanting.

The Eredivisie match between Feyenoord and FC Twente in De Kuip stadium on Sunday was watched by 13,000 people, many of whom stood up, clustered together in groups and sang throughout the game, in defiance of the KNVB’s protocol.

Asked about the scenes of supporters chanting and cheering, Rutte said: ‘You just can’t do it. It’s very stupid. We won’t get the virus under control. The numbers have gone up again today, you know?

‘Just shut your mouth when you’re sitting there watching the game and don’t yell.’

The prime minister said during a debate in parliament in June that games may have to be played behind closed doors if fans fail to abide by the rules, which were drawn up to allow games to be played in front of limited numbers of fans. Other countries such as Italy, Germany and England have started the new season in empty stadiums.

The KNVB said last week it was generally pleased with the way supporters had complied with the rules, but noted that some were struggling with the no singing rule.

The second round of matches was seen as a more serious test because all of the ‘big three’ – Ajax, PSV and Feyenoord – were playing at home for the first time.

Feyenoord have said extra stewards will be in place at next Sunday’s home match against ADO Den Haag to ensure fans observe the rules.