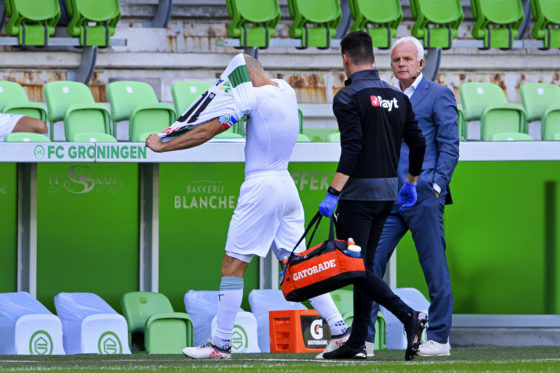 Arjen Robben pulls his shirt off in frustration after leaving the field. Photo: ANP/Olaf Kraak

Groningen’s star signing Arjen Robben limped off after 29 minutes of his first Eredivisie match in 16 years after picking up an injury against PSV Eindhoven.

The German raised eyebrows when he left rising star Mohamed Ihattaren out of the starting line-up following a training-ground dispute, but insisted that his decision was made for ‘footballing reasons’. ‘He [Ihattaren] has apologised,’ Schmidt said. ‘Mo is important to us, I expect him to play plenty of games.’

Groningen coach Danny Buijs said the type and extent of Robben’s injury would not be known until later in the week. ‘He’s disappointed and frustrated and that’s understandable, especially when you see everything he’s been through to get to this point,’ he said.

Elsewhere champions Ajax scraped a 1-0 win away to Sparta despite playing most of the match with 10 men after Nicolas Tagliafico was sent off on 28 minutes for handling the ball. Brazilian striker Antony crowned his debut with the only goal of the game 10 minutes later.

Feyenoord also started with an away win as they proved too strong for PEC Zwolle. Captain Steven Berghuis scored both goals: the first a long-range strike after just five minutes, the second from the penalty spot.

VVV Venlo’s new Greek striker Georgios Giakoumakis made a spectacular debut as he scored a hat-trick in the second half at Emmen to turn around a match that the Drenthe side had been leading 2-0. The Limburgers went on to win 5-3 despite having just 26% possession.

Oussama Darfalou scored the only goal as Vitesse Arnhem saw off RKC Waalwijk in the first match since the departure of the prolific Bryan Linssen for Feyenoord. Another team who lost their top scorer over the summer, Heracles Almelo, were nevertheless too strong for troubled ADO Den Haag.

The first match of the season saw Heerenveen beat Willem II 2-0 with both goals coming from defenders, Lucas Woudenberg and new Polish signing Pawel Bochniewicz. In Saturday’s other fixture, Twente Enschede overcame Fortuna Sittard by the same scoreline to give veteran coach Ron Jans a win on his return to the Eredivisie.