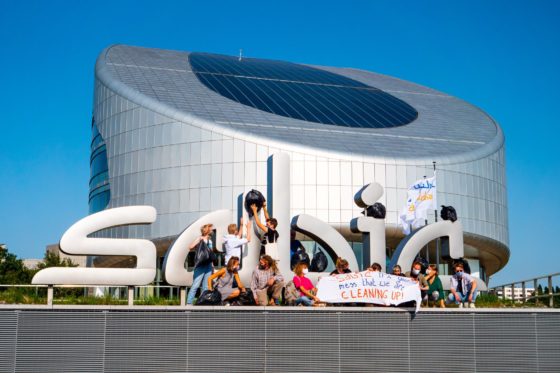 In the run up to a ‘world clean up day’ on Saturday, environmental organisations have organised a protest to lay waste at the door of plastics producer Sabic.

Maastricht 4 Climate and Precious Plastic Maastricht object to Sabic’s involvement in the ‘Maas Clean Up’ of plastic waste, accusing the organisation of ‘greenwashing’. Arthur Bribosia and Ezekiel Stevens said they planned to collect and ‘give Sabic their rubbish back’ because they felt the company was not doing enough to reduce single-use plastics and produce less overall.

‘One of the main producers of plastic products, who probably produced much of the plastic we will pick up on Saturday and who now belongs to the largest oil company in the world [Aramco], is mobilising us and telling us that together, we can preserve and take care of nature,’ they wrote in an opinion article.

‘This is not okay. Is littering bad? Yes! Should we come together and clean up? Definitely! Should we do this together with multinationals? Maybe, but only if they actively work towards producing less plastic waste. We need to turn off the tap, not just mop the floor one day a year.’

Together with a group of volunteers, they planned to deliver plastic waste to Sabic’s European headquarters in Sittard, Limburg. Arthur Bribosia, on the way to the protest, told DutchNews.nl: ‘The main message is the greenwashing. It’s great that people are coming together to clean the city, but we want to point out that this shouldn’t be organised by the fossil fuels industry.’

On Saturday, 36,000 Dutch people are due to take part in The Netherlands’ contribution to world clean up day, with European Commission first vice precident Frans Timmermans blowing the starting whistle in Brussels and a Litterati app to target their efforts. Although the Amsterdam clean up has been postponed due to the recent rise in coronavirus infections, across the country more than 150 schools have been taking part in a special school clean-up.

Theo Stijnen, director of Plastics Europe trade association for plastics producers, said that it was simplistic to blame plastic producers alone and pointed out that consumer behaviour controls littering.

‘Plastics are important and necessary, but it is very troubling that they get into the environment and that is the point of the clean-up action,’ he said. ‘There is a discussion between NGOs and companies: companies say consumers are responsible for disposing of waste, collecting or recycling while NGOs say we cannot blame the consumer.’

He said that plastics producers pay for the recycling infrastructure, adding that they did have a duty to redesign products to be more eco-friendly. ‘Design is a key thing and they must be looking at sustainable packaging that can be reused or at least recycling. The mindset in the industry is changing.’

The Ellen Macarthur Foundation, which has predicted that plastic in the ocean could weigh more than the fish by 2050, has called for consumers, producers, governments and activists to create a ‘new plastics economy’ in which products are only designed with reuse in mind, and everyone plays their part in avoiding waste.

Separately, on Friday, police in Amsterdam were called in after around 150 environmental protesters blocked a road in the Zuidas business district, complaining that companies have too much influence on environmental policy.

A spokesperson for Sabic said the business attempted to be a responsible producer. ‘We believe that we are not only part of the plastic waste problem, but we play also an important role in the solution of this problem,’ she told DutchNews.nl.

‘Plastic and other waste do not belong in our environment. That is the reason why this Maas Clean Up campaign was set up and why it is supported by Sabic. As one of the founding partners of the Alliance to End Plastic Waste, we have the mission to solve the complex problem of plastic waste. As a producer, we also feel responsible for…preventing plastic pellets from ending up in our environment, [and] developing a wide range of solutions for reusing plastics.’