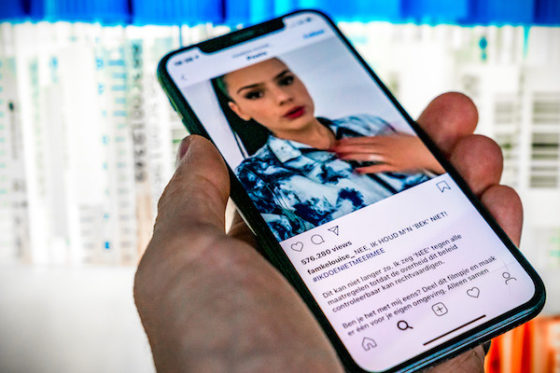 Campaign group Viruswaarheid, which opposes the government’s measures to deal with coronavirus, is behind a campaign in which a number of Dutch pop stars and minor celebrities have announced that they will no longer be part of efforts to combat the virus.

DJ Hardwell, several times voted the best DJ in the world, is the most famous name on the list of people who signed up to the Instagram campaign, using the hashtag #ikdoenietmeermee.

Another notable in the group is singer Famke Louise, who was paid an unknown amount by the government earlier in the pandemic to start in a video urging young people to take the coronavirus rules seriously.

According to the NRC, the idea for the campaign was drawn up by a group of celebrities in a Whatsapp group stimulated by Viruswaarheid, and has taken over a month to put together.

‘More and more Dutch celebrities came forward who have doubts about legality of the coronavirus measures and who were considering going public,’ Viruswaarheid spokesman Jeroen Pols said.

Willem Engel, the dance teacher turned activist who founded Viruswaarheid, told the NRC that the group is supported by a number of scientists and doctors. ‘These celebrities speak to young people, who are being shamed by politicians for their behaviour. I think youngsters will feel supported by them.’

Dozens of other high profile figures as well as politicians have condemned the Instagrammers, while the hashtag #ikdoenietmeermee, and counterpart #ikdoewelmee are trending on Twitter.

How much support the campaign generates remains to be seen, but Famke Louise, who has one million followers on Instagram, was a guest on the Jinek chat show on Tuesday evening, to talk about her role.

Some commentators are asking if the campaigners are short of money, given that live performances and club nights have been put on hold because of coronavirus.

And social psychology professor Paul de Lange told the AD that the bigger the group sharing the hashtag gets, the more likelihood that other people’s behaviour will be influenced. ‘And that,’ he said, ‘can undermine support for the measures in general.’

A number of djs and rappers who had joined the campaign withdrew their Instagram posts on Wednesday, including popular performers Bizzey, Mental Theo, Tim Douwsma and Yes-R.

Singer Douwsma, who had defended the campaign in a television talk show on Tuesday night, said he had cancelled the video because the hashtag ‘was unfortunate’.

‘I hope you can see that I did this with the best of intentions,’ he told fans via his Instagram account.