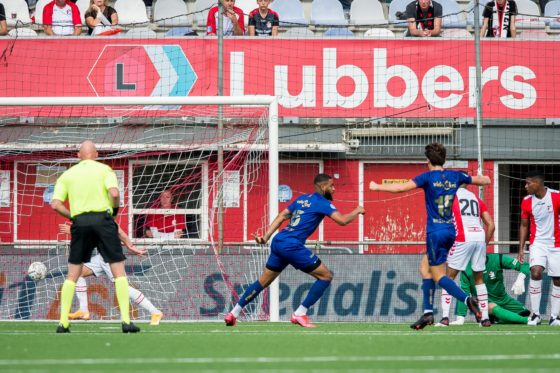 The Dutch football association has said fans still need to ‘adjust’ to the ban on singing at matches after several incidents of chanting on the opening weekend of the new season.

Fans have been allowed back into stadiums under strict conditions that include keeping 1.5 metres apart from other family groups and refraining from cheering, singing or shouting.

Prime minister Mark Rutte has warned that stadiums may have to close their doors again if supporters fail to observe the rules. ‘Put simply: then we’ll have a real problem. That means it’s not working and we’ll have to look again,’ he said in a debate in parliament in June.

The KNVB said most fans had followed the rules during Saturday and Sunday’s matches, but the ‘no cheering’ rule was proving a challenge, particularly when goals are scored or players are sent off.

‘Although not every noise in the stadium can be classed as a large-scale and extensive chanting, we have seen that this did not go entirely without a hitch,’ the KNVB said after the weekend fixtures. ‘It was the first round of matches in the Eredivisie, so some people are probably still adjusting.

‘This is only one aspect of one of the many rules. In general we are positive and very pleased that football has started again.’

Paul Depla, the mayor of Breda who represents the 31 municipalities with professional football teams, told NRC that next weekend would be a bigger test with Ajax, PSV Eindhoven and Feyenoord all playing their first home matches. A total of 13,000 tickets have been sold for Ajax’s game in the ArenA against RKC Waalwijk.

‘Everything will be safe inside, but all those people will have to get home by metro, train and bus. That will be more interesting.’

‘It’s difficult to stop supporters singing,’ Depla added. ‘As mayors we don’t want to get into the business of policing cheering.’