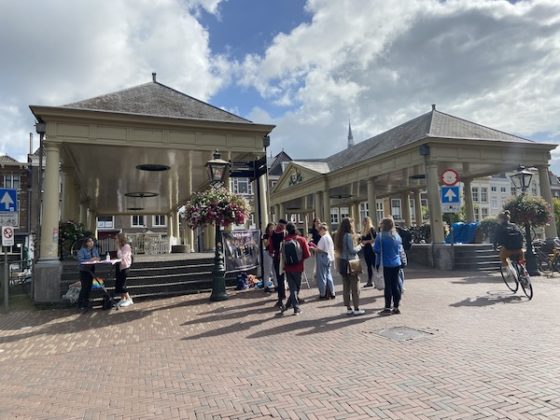 A meeting for international students in Leiden. Photo: Brandon Hartley

The number of international students coming to study in the Netherlands from outside the EU this year maybe down as much as 50%, according to figures from the IND immigration service.

Non-EU students have to apply for a residency permit from the IND, and so few have applied this year that immigration service workers are being reassigned to other duties, the government agency said.

After years of steadily rising figures, there has now been a clear reversal, IND spokeswoman Jacqueline Neumann told the Telegraaf. ‘The coronavirus pandemic has led to a large number of foreign students staying away’.

In the first seven months of this year, the IND processed 8,440 applications for student visas, compared with around 14,350 during the same period last year. However, not all the students who apply for a visa actually take up a university place.

As yet there are no figures available for the number of EU students coming to the Netherlands because they do not need to apply for a visa. Nuffic, the government agency which focuses on the internationalisation of the Dutch education system, does not yet have any more concrete figures.

This summer, a Nuffic survey among 941 potential students from outside the EU showed that 80% were still interested in a place at a Dutch university but that just 40% were sure they would still press ahead with an application.

‘For an international student, the experience of living in the Dutch society, including travel and leisure activities, is one of the main reasons of studying in the Netherlands,’ Nuffic said at the time.

Study goes viral: what to expect at Dutch university in times of Covid19

International students currently make up 12% of the Dutch student body, and some 25,800 are from non-EU countries.

Research published by the government’s macro-economic think-tank CPB last September said that even after the cost of sending Dutch students abroad is deducted from the total, foreign students from outside the EU generate up to €94,000 each for the government.

This is because their fees are much higher and around 30% of them remain in the Netherlands after graduation to work, the CPB said.

Non-EU students pay upwards of €20,000 a year for their courses, compared with the basic fee for a Dutch or European student of €2,143.

DutchNews.nl has asked the education ministry what the downturn in international student numbers will mean for university finances in the long term.