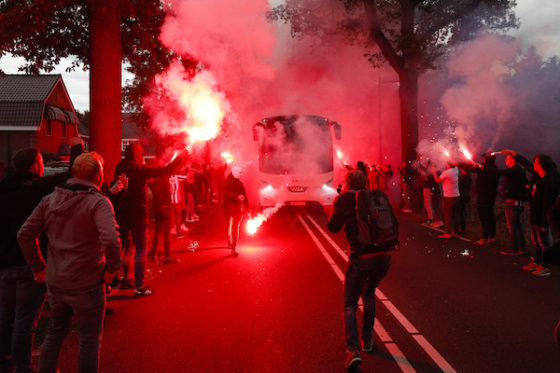 Willem II fans waiting for the players bus ahead of the game. Photo: Willem Putmans ANP

Doctors, police and politicians have reacted furiously to the decision by Tilburg city council to give football fans a permit to party ahead of Thursday night’s football pitch between the local football club and Scottish side Rangers.

The match, Willem II’s first foray into European football for 15 years, ended in a 0-4 defeat for the home side, ending their Europa League hopes.

But the decision to allow 1,000 fans to watch the game on a big screen was defended by mayor Theo Weterings. ‘It we had not allowed it, there was a risk supporters would have joined up together at other places in the city.’

Photos and film footage show hundreds of fans standing close together in a fenced off area to watch the game, singing and shouting.

‘We made an agreement about 1.5 metres and the organisers tried to intervene but it unfortunately did not work,’ the mayor said. ‘We know where we have to be to hand out fines in the coming days.’

A spokesman for the mayor told local broadcaster Omroep Brabant earlier that given this was the first time Willem II had played European football in 15 years ‘we knew there would be a party’.

But Maarten Brink, head of the local branch of the ACP police union said on Twitter: ‘Police officers are asking what on earth the city was thinking off to give a permit for this sort of ‘meeting’. I am baffled, and I hope the last word has not been said.’

Riot police were on standby and arrested six people after fireworks and beer cans were thrown at them.