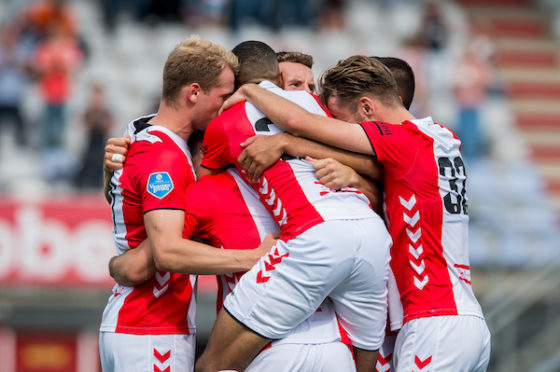 A sponsor deal between FC Emmen and a sex toy maker has been been torn up by football association KNVB for being ‘inappropriate’ despite both parties’ mutual consent and the approval of the advertising standards commission.

Emmen chairman Ronald Lubbers, who agreed the deal with EasyToys, said he does not understand the KNVB’s reasoning. ‘They are saying it goes against the rules of decency and that implies we are an indecent club. That hurts,’ Lubbers told local broadcaster RTV Drenthe.

Lubber said the deal would have meant a lot of money for the Eredivisie club. ‘I am disgusted our main sponsor deal has fallen through but I’m even more disgusted with the KNVB,’ he said.

‘It is claiming there is a link with the sex industry but we are talking about a perfectly normal company which sells sex toys to people here and abroad, a company which is doing well and is socially responsible. And besides how can you label the most widespread practice there is as sex industry. That would mean that half of all bedrooms would fall in that category.’

The KNVB said it had labelled the deal ‘inappropriate’ because football must be accessible for young and old.  Lubbers said that too had been sorted. ‘We agreed that our youth team would not playing in shirts displaying the sponsor name. The merchandising would not be aimed at the young either,’ he told the broadcaster.

Lubbers said the KNVB’s opposition to the deal, which had been given the ok by the advertising standards commission, was puzzling because it has allowed the sport gambling site TOTO to appear on shirts. ‘Gambling can lead to addiction and much bigger problems in the end,’ Lubbers said.

EasyToys director Eric Idema is also disappointed the deal is off. ‘The KNVB wouldn’t even talk to me. I had plenty of arguments to convince them that this would be a clean deal. I have a healthy company with a lot of hardworking people. I was born in Emmen and I wanted to do something for the club.’