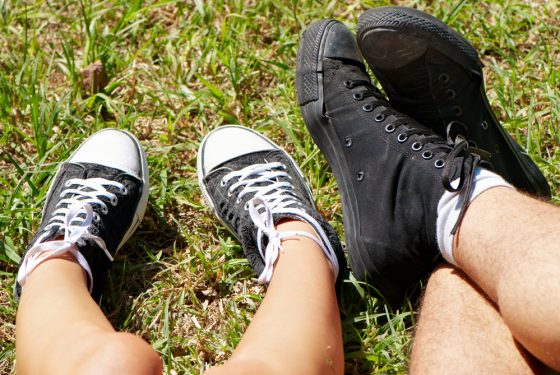 Standing outside Spinoza Lyceum in the south of Amsterdam, you’d be forgiven for thinking it was 2019.  Many of the secondary school’s 1,280 pupils congregate en masse for lunch break. Some stand in small groups; others devour sandwiches. But none are social distancing. And that’s because they don’t have to.

Yet, according to new figures released on Friday, 30 pupils at the school have tested positive for coronavirus, as have members of staff. But school continues non the less, with few concessions to the virus.

In the Netherlands, the national rules for school pupils are clear. ‘Young people aged 13 until 18 years old … do not have to stay 1.5 metres apart from each other, but they do need to keep their distance from others (adults),’ read the rules on the website of public health institute. ‘This applies to all pupils in secondary schools, regardless of their age.’

As pupils returned to school last month in full pre-coronavirus numbers, some found this lack of social distancing among themselves, the crowded hallways, no face masks and no kind of staggered education worrying.

‘It’s just like it used to be before corona,’ says 10th-grader Sophie Petrovic, who attends Spinoza Lyceum.’I am nervous about catching corona. Sometimes there are people next to me, in front of me, behind me and everywhere. That can’t really be normal.’

Despite a five-fold increase in Covid-19 infections among children aged 15-19 over the summer, the RIVM says its advice is based on facts.

‘We do a lot of monitoring and research into not only is this age group getting the virus, but how important they are in its transmission,’ says RIVM spokeswoman Marlies Hilhorst. ‘And we don’t think they contribute to distributing the virus among the population. From our data looking at the ages and cases in the Netherlands, it’s the next group up, the 20-40-year-olds, who are the main transmitters.’

That would explain why colleges and universities are mostly online. But for the high schoolers, it’s a bit of anything goes—even in the same city.

‘There are totally different rules for the two schools,’ says Brouwer. ‘The Vossius doesn’t have many rules—no facemasks, no hand gel and the canteen is open and you can buy food and eat it there. But Amsterdams Lyceum is stricter. All kids must go outside during the breaks, even in the rain! The canteen is closed and students must wear facemasks in the hallways and have hand gel in their bags.’

After her youngest son had a coronavirus scare and the whole family went into mandatory quarantine until his test came back negative, the family took up where it left off.

‘I’m not worried,’ says Brouwer, who had just received word from Amsterdams Lyceum that a student had tested positive for the virus. ‘I think the government knows what it’s doing. I have confidence in them. I’m more worried about my older mother and my neighbour, but not so much the kids.’

‘I think the government is handling it perfectly,’ says 16-year-old Mara Waalvis from Geert Groote College in Amsterdam Zuid. She says wearing face masks could help. But she’s not wearing one. ‘If we had to, I would, like on public transportation,’ she says. “But I don’t wear a face mask because there’s no rule for it.’  While she’s not worried about getting sick, she is worried for her teachers.

‘What is safe?’ asks Violeta Veljkovic, a German teacher at the Spinoza. ‘We have to disinfect our hands, and we have a plastic divider between us and the students to help stay 1.5 metres apart, but we’re not obliged to wear masks in class. I do everything I can to protect myself, but you have to live your life. Life has to go on.’

The Amsterdam public health board says it doesn’t give out the numbers of those infected at secondary schools unless it concerns public health. But the Spinoza Lyceum says the number of infections has recently increased more than it expected.

Even the cook at the school’s cafeteria tested positive for the virus, causing the temporary shutdown of the canteen. But the school has not closed, and that is down to the calculated balance that students, teachers, parents and governments worldwide are grappling with for the 2020/21 school season.

In the Netherlands, the calculation for dealing with students and staff who have tested positive for Covid-19 goes like this: anyone who has been closer than 1.5 meters to an infected person for more than 15 minutes must go into quarantine, along with their family.

‘I understand the logic,’ says Alexandra Middag, whose son Romain is in his third year at HLZ, where students must wear face masks in communal areas and walk single file in the hallways.

They are also advised to bring packed lunches to school to avoid going to the supermarket during breaks. ‘I think they are trying to protect teachers, minimize risks and contain the number of those infected,’ Middag says. ‘But I think to be effective, the rules should be the same inside and outside of school.’

And therein may lie the contradiction for the students themselves. As the number of corona cases spikes in The Netherlands, high school students continue to gather and party in large numbers, whether in their homes or on the school playground. One teen, who doesn’t want to use her name, explained why she plans on attending an 18th birthday party with an expected crowd of 40.

‘I just find it very weird for the government to decide you can only have a maximum of six people in a house, but then letting all the schools in Amsterdam open with a lot of children,’ she says.

‘We’re at school with these kids all day long, sitting 30 in a class, and no one is cleaning where they sit. Even if I don’t go to the party, I’ll be back at school with the kids who did go on Monday. And of course, there’s the government’s own rule: no social distancing needed under 18.’