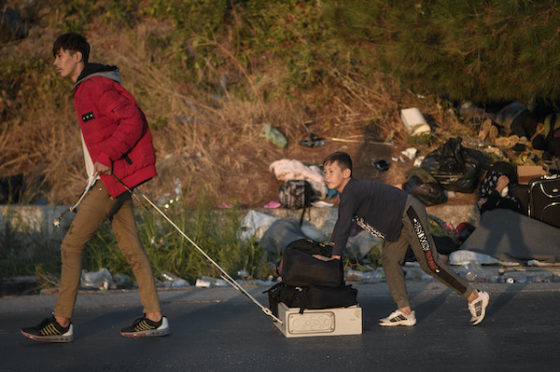 Homeless refugees push their possessions along the road. Photo: Louisa Gouliamaki/AFP via ANP

The Netherlands has agreed to take in 100 refugees left homeless after fire ripped through their camp on the Greek island of Lesbos, but will cut the number of asylum seekers it will accept from another UN scheme by 100 to compensate.

The compromise, thrashed out by the four coalition parties on Thursday, has been slammed by opposition parties on both sides of the political spectrum as well as refugee organisations.

The deal involves bringing in 50 minors under the age of 14 who are in the Moria camp without parents, and 50 other people from vulnerable groups, to the Netherlands. But 100 of the 500 recognised refugees from war zones that the Netherlands was due to take in next year under a UN scheme will not now be allowed to come to the Netherlands instead.

‘It is shameful that so few refugees can come to the Netherlands after such a catastrophe,’ said Tineke Ceelen, head of the Stichting Vluchteling foundation. ‘And it means that 100 fewer people can come from countries which are at war.’

Wil Eikelboom, head of the Dutch association of asylum lawyers, said on Twitter that the agreement is an ’empty shell’ and ‘shameful’.

Opposition MPs too described the deal as disgraceful and a ‘con trick’. ‘There is no question that this can be considered a good deal because it is at the expense of other vulnerable children,’ said GroenLinks MP Bram van Oijk.

Most of the 13,000 people living in camp Moria, which was built to house 3,000, come from Syria and Afghanistan.

Coalition MPs, however, said they were glad that the agreement had been reached, although D66 and ChristenUnie said they had hoped more refugees would be allowed to come. ‘But in a political coalition, you have to give and take,’ said ChristenUnie MP Joel Voordewind.

VVD parliamentarian Bente Becker said the deal is a ‘gesture’ towards Greece and that the number of refugees coming to the Netherlands would not be increased. ‘We cannot take in more people,’ she said. ‘We also look at the [public] support’.

The NRC said in a stinging editorial that the Netherlands should take in 500 children at least.

‘The fact that the four ruling parties had not come up with substantial solution in an acute situation is a scandal they will all have to carry,’ the paper said, in a nod towards next year’s general election. ‘The Netherlands should be showing its human face. Otherwise not only camp Moria, but the moral credibility of this cabinet, will go up in flames.’

Trouw, in an analysis, said the Moria situation showed how the EU had failed to come up with an effective and humane policy to deal with migration.

Little has changed since the refugee crisis of 2015, and attempts to reform the European strategy towards migration and refugees have been on hold for years due to bickering member states, the paper said.

‘But perhaps the camp Moria issue would wake up those responsible for EU policy,’ the paper said, ‘and put pressure on them to reach a compromise.’