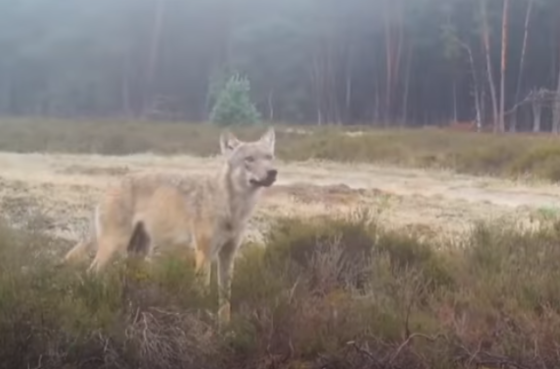 Conservation organisation Natuurmonumenten has captured unique footage of a female wolf hunting, drinking at a watering hole and being seen off by a male deer.

Wardens at the southern part of the Veluwe nature reserve started noticing deer behaving nervously in the spring. ‘They were moving about in different areas and groups. The whole dynamic in the forest had changed,’ warden Frank Theunissen told broadcaster NOS.

In May droppings and paw prints revealed the presence of a wolf. Cameras were installed in different places and in June the wolf put in its first appearance on screen, to be followed by many other recordings. At no time have wolves been captured this clearly, and this often, Natuurmonumenten said.

‘I love the image of the male deer confronting the wolf. It seems to be saying ‘ I’m bigger and stronger than you, you don’t frighten me’, Theunissen said. ‘What are the odds we could ever see this type of interaction?’

DNA from the droppings is currently being investigated to see if the wolf is a newcomer to the area or if she is a young wolf from the pack that has settled in the northern Veluwe. A wolf is officially regarded as settled if it stays in an area for longer than six months.

‘Now we have to see if a male wolf will find her, and we hope it happens. And then we will have a litter of our own here in the southern Veluwe,’ Theunissen said.

Walkers do not have to avoid the area but if they do come face to face with the wolf Theunissen’s advice is to ‘acknowledge the strength of the wolf and know your place’.

The return of the wolf in the Netherlands is controversial because they have been involved in numerous attacks on sheep and on young Highland calves.

However, as wolf monitoring organisation Wolven in Nederland has pointed out, the wolves eventually turn their attention to other prey, such as deer and boar. The recently discovered wolf was filmed carrying a boar piglet in its mouth.