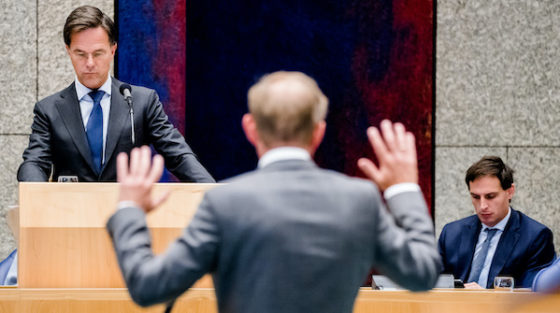 The coronavirus pandemic dominated Wednesday and Thursday’s debate on the government’s 2021 spending plans, broadcaster NOS said in its report on the two day event.

The debate, during which opposition parties try to force ministers to make changes to their spending plans, was also the unofficial start of the 2021 election campaign, according to some commentators and MPs.

In particular, far right parliamentarian Geert Wilders used the debate to try to focus on other issues, such as his recent court case.  But apart from fellow far-right leader Thierry Baudet, no one joined in the attack on the prime minister.

‘And so, Rutte could do what he has been doing for the past 10 years,’ the NRC said. ‘He looked for support within the other parties for his cabinet’s plans, he bent a little, and he gave party leaders the feeling that they were part of it all.’

After all, the NRC pointed out, the government does not have a majority in the upper house of parliament and will need the backing of at least one opposition party to pass some of his more controversial measures.

In total, €46bn of the total €337bn budget will go on measures to offset the impact of the pandemic, most of which will be used to shore up industry and jobs, NOS said.

But there was criticism of the ‘vague’ plans to set up a €20bn investment fund, with MPs questioning exactly what sort of projects the fund will be used to support. Ministers have pledged to come up with more details in the coming weeks.

A number of opposition parties are also opposed to plans to give a new tax break to companies which invest in creating jobs. This plan too is vague, MPs said, and could be seen as a gift to multinationals and their shareholders.

Rutte, however, said the aim is to stimulate job creation by smaller firms as well, and promised to publish more details by October 5.

MPs did back a Labour party suggestion that people who lose their jobs because of coronavirus should be given a job guarantee, something which Rutte said would not be practical. However, he promised to look into the option of doing more to make employers help workers who are being sacked because of the crisis to find new work.

Other motions, calling for a structural pay rise for healthcare workers as well as tax-free bonuses, will be voted on next Tuesday, when MPs debate the government’s coronavirus strategy.

Wilders submitted two motions, one describing his recent trial on discrimination charges and one condemning the legal system for not taking rapper Akwasi to court. Both failed to generate much support.

However, a motion from the fundamentalist Protestant SGP, which stated that people with a ‘non western ethnic minority background’ are over-represented in crime figures and which called on the government to ‘recognise, research and tackle the issue’, did win majority support, NOS said.

A further motion from Denk, stating that the Netherlands is not a corrupt country and that MPs have full confidence in the rule of law passed with a clear majority.

There was also majority support for a motion calling on the government to ‘look seriously’ at the business case for building new nuclear power stations – a proposal which came from Rutte’s ruling VVD and the Christian Democrats.

These power stations should also be built with government subsidies, as happens with wind and solar farms, the two parties say.

‘If you want to build a nuclear power station, you are required to have billions in your bank account to pay for decommissioning, before you have earned a cent,’ VVD parliamentary party leader Klaas Dijkhoff is quoted as saying by the Telegraaf. ‘As a government, you can say that you are ready to do business. Such a demand is telling everyone not to bother.’