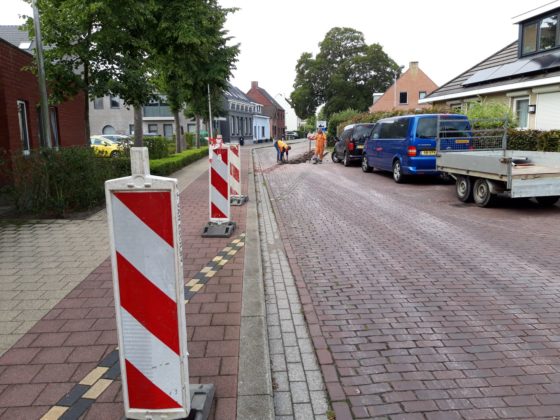 The streets of the Netherlands have got a little bigger overnight. In the small Belgian town of Essen, border markers between the countries are being shifted to give the Netherlands some 100 square metres more space.

Although a press spokesperson for Essen was keen to stress that nothing had changed in the theoretical land barriers, the street marker stones are now being moved south by 1.8 metres on two streets.

‘It was because in 1849 there was still a canal on the location of the border,’ mayor Gaston van Tichelt told Flemish public broadcaster VRT NWS. ‘A border marker could of course not be placed in the water and so they decided to set it a metre further along. The canal hasn’t been there for a long while but the markers stayed there. It was time to do something about it.’

He said that nothing would change for the local residents, although he remarked that a Belgian customs building would be partly in the Netherlands. The changes were paid for by the neighbouring Dutch town of Roosendaal, which requested them after an annual border control revealed that Essen had spread beyond its theoretical limits.

A spokesperson from Essen said to DutchNews: ‘The border has always been correct on paper but it was only the streetscape that was wrong. Now the border is where it should be.’

Coronavirus lockdowns have highlighted the patchwork situation in the line between the Netherlands and Belgium, which is drawn across the middle of buildings, streets and houses.

The Zeeman shop in Baarle-Nassau, a village in Noord-Brabant which straddles the border, had different rules for different parts of its shop, with some goods taped off when Belgian shopping was forbidden in March. When there have been quarantine rules between the two countries and different face mask obligations, other residents of Baarle-Nassau have complained about confusion.

However, some residents of Essen appeared happy with the adjustment, if a little bemused. Nino Vaudo, who lives on the appropriately-named Grensstraat told local paper De Echo: ‘I live on a Belgian street, on the Dutch side and I seem to have got some extra metres of street for my birthday! It think it’s good, although a bit mad. I don’t really know why they are doing it.’

Jeroen Steenmeijer, a spokesman for Roosendaal, could not tell DutchNews.nl what the border changes were costing the Dutch taxpayer. ‘We are doing the work, and that’s it,’ he said.