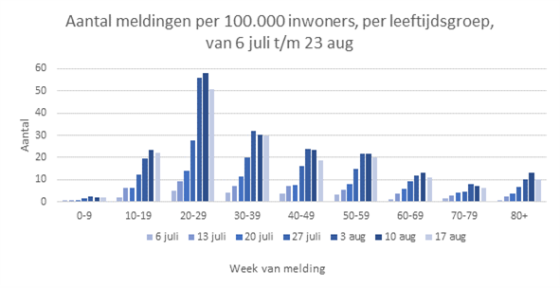 The number of positive coronavirus tests in the past seven days fell by 425 to 3,588 compared with the previous week, the public health institute RIVM said on Tuesday.

The number of tests was up, at over 140,000, taking the positive rate down from 3.5% to 2.5%, the RIVM said. The R rate, which indicates how many people each coronavirus patient infects, has also gone down to around 1.

In Zuid-Holland, which includes Rotterdam, there has also been a decline in positive tests, but the situation is virtually unchanged in Amsterdam, the current hot spot, and in Noord-Brabant, the RIVM said in its weekly update.

The decline in positive tests and increase in testing follow warnings from ministers and public health experts that the Netherlands faces tougher rules to combat the virus, if the infection rate does not go down.

The decline is probably due to a combination of factors, microbiologist Jan Kluytmans told broadcaster NOS. ‘And it is not that important to know why something happened, if we are heading in the right direction without draconian measures.’

The rise in infections throughout August was largely due to private parties at home, which led the government to impose a limit of six guests at last week’s press conference.

‘This was a wake-up call and a relatively simple measure which would appear to have helped reduce the number of infections to a lower level,’ Kluytmans said.

Despite the drop in positive tests, hospital admissions have gone up sharply, from 50 last week to 84 in the past seven days. The number of deaths has also doubled from 16 to 32.

Although more people are being admitted to hospital, the RIVM figures show just 9% of current positive tests involve the over 60s, even though they account for 25% of the population. People in their 20s and 30s account now for half the positive tests.

Meanwhile, researchers at Leiden’s LUMC teaching hospital, say the infection rate may now be so low among elderly people because they are taking steps to protect themselves.

The researchers base their claims on an analysis of information provided by 10,000 people about their health, which includes details about how many people they have had close contact with, the AD reported.

Since the lockdown was lifted, the gap between how many contacts the elderly have – roughly two or three – has widened with that of people who work, who now have around eight close contacts with others every day.

In particular, people in their 70s and 80s are showing different patterns of behaviour, the researchers said.

Some people have suggested more should be done to protect the elderly against coronavirus, while giving youngsters, who have few symptoms, more freedom.

But the idea has been condemned as unworkable by medical experts and dismissed as discriminatory by organisations representing the elderly.