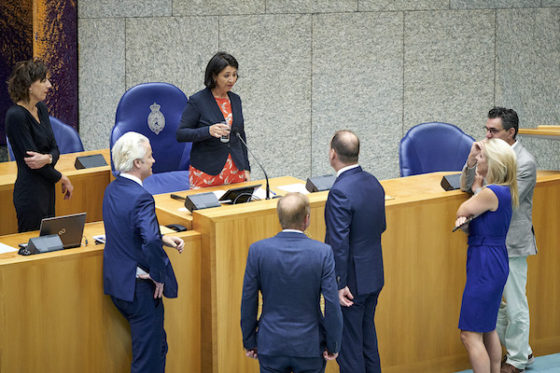 The long-awaited debate on the government’s strategy to combat coronavirus ended in chaos on Wednesday evening, with opposition MPs accusing MPs from the ruling parties of walking out of parliament to avoid a vote on healthcare workers pay.

The motion, drawn up by far-right leader Geert Wilders, called for a structural increase in nurses and healthcare workers wages. However, when it came time to vote, there were not enough MPs in parliament to make it official, leading opposition MPs to accuse the four ruling parties of being anti-democratic.

Coalition MPs denied avoiding the vote, saying parliamentary rules had to be followed. MPs themselves had decided that more time was needed to take a considered vote, D66 parliamentarian Paul van Meenen said later on Twitter.

Aside from the issue of pay, MPs also condemned the ‘chaotic’ communication strategy of the past few weeks.

In particular, the decision to introduce compulsory quarantine for people who had travelled to risky countries, or who emerged as likely patients in contact tracing, came under fire.

Just a few days earlier, the prime minister had said quarantine would be a matter of person responsibility and then did a ‘major u-turn’ to bring in compulsory isolation, Labour leader Lodewijk Asscher said. (See separate story).

MPs also raised the capacity problems at health boards which are responsible for carrying out contact tracing, particularly the news that Amsterdam and Rotterdam are having to wind down their contract-tracing programmes.

Tracing contacts is one of the ‘fundamentals’ of the Dutch strategy to tackle coroanvirus, said Socialist leader Lilian Marijnissen, pointing out that in May health minister Hugo de Jonge had assured MPs that the health boards would be able to deal with the number of infections.

Recruitment is being scaled up, De Jonge said, but he refused to say mistakes had been made. ‘In practice, things worked out differently than we had assumed,’ the minister said.

Questions about ventilation, particularly in school buildings, also came on board, given that the new term will start in a few days.

De Jonge refused to agree that ventilation played a role in spreading the virus, referring to the successful way the first wave of infections had been tackled, without taking any measures to deal with potential spreading of the virus via ventilation systems.

Nevertheless, in order to put teachers’ and parents’ minds at rest, schools would be helped to make sure that they meet the guidelines for ventilation in school buildings. If not, they would get extra help to find a solution, De Jonge said.