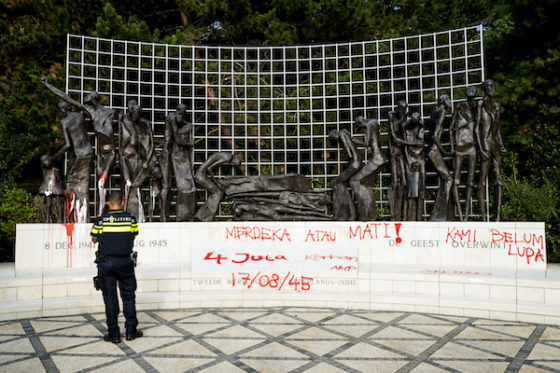 The Indisch Monument in The Hague, which commemorates the victims of the Japanese occupation of Indonesia during World War II, has been daubed with red paint just one day before the annual August 15 remembrance ceremony.

Red letters reading kami belum lupa or ‘we have not forgotten’ were painted across the front of the memorial, as is the date 17/08/45 – the date Indonesia declared its independence from the Netherlands. The Netherlands did not recognise the country’s independence until December 27, 1949.

The vandalism has been claimed by Aliansi Merah Putih, a group which says it is campaigning for justice with regard to Dutch colonialism. The memorial has been targeted, the group says, because the commemorations are racist and do not take the perspective of ordinary Indonesians into account.

‘But it is inappropriate to do this to a memorial,’ she said. ‘We remember all the victims of the war, the Dutch Indonesians, the Indonesians, the Chinese and the Mollucans, the entire diverse group’.

Officials have now begun cleaning off the paint ahead of Saturday’s ceremony, which will be attended by king Willem-Alexander.