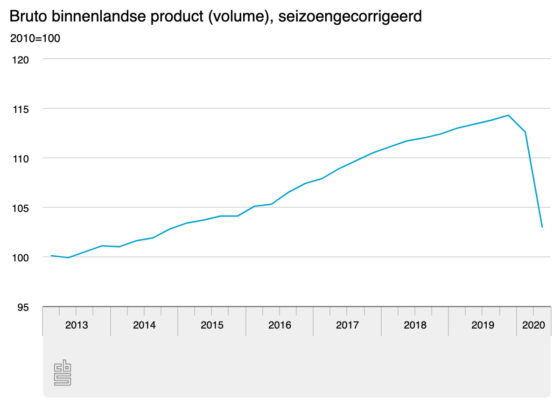 The Dutch economy shrank by an ‘unprecedented’ 8.5% in the second quarter of this year, compared with the previous quarter, national statistics agency CBS said on Friday.

Around half the record decline is due to the 10.4% drop in consumer spending, the CBS said.

The 8.5% drop comes on top of a 1.5% reduction in the first three months of this year. The lockdown in the Netherlands began mid-March and started to ease in June.

CBS chief economist Peter Hein van Mulligen described the drop as ‘unprecented’.
‘There has been colossal damage to the economy, with a total contraction of 10% over two quarters,’ he said. ‘We did not see anything like this in the 1930s.’

Nevertheless, the situation is worse in other EU countries. The German economy, for example, contracted 10.1% in the second quarter, while the British economy shrank by over 20%.

The contraction has also been softened by a raft of government measures. For example, some three million people received some form of income support in the second quarter, most of whom were in permanent jobs.

At the same time, the coronavirus crisis is also beginning to make its presence felt in the jobs market. In total, there were 322,000 fewer jobs in the Netherlands in the second three months of the year, compared with the first quarter, the CBS said.

At the same time, the official jobless total rose 26% to 349,000. The shift marks an ‘unprecedented drop in the number of jobs,’ the agency said.

Social affairs minister Wouter Koolmees said the new figures were troubling but not unexpected. ‘We have seen this coming,’ he said. ‘This is why we brought in an emergency measures, to absorb the worst of the shocks.’