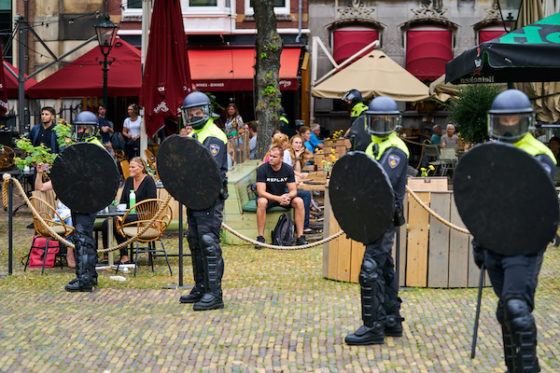 The number of people dying from coronavirus in the Netherlands hit 10 in the past 24 hours, the highest figure since June, according to the government’s Covid-19 monitoring dashboard.

Over the past seven days, an average of 3.7 people have died of the virus on a daily basis, compared with 1.7 in the previous week, broadcaster NOS said.

In addition, a further 529 people have tested positive for the virus in the past 24 hours, of whom 122 were in the Amsterdam region. The capital has now overtaken Rotterdam for the most new infections in a day.

Amsterdam city councillors are debating local strategy to reduce the spread of the virus on Thursday, in the wake of Tuesday’s decision by mayor Femke Halsema not to bring in any significant new measures.

In particular, councillors are concerned that the introduction of face masks, particularly in the red light district, is being ignored by most people. Officials say just 20% of people in the area are wearing a mask, despite the threat of a €95 fine.

However, mayor Femke Halsema told councillors, the city has not yet fined anyone for not wearing a mask.

Retail organisation INretail says the requirement that masks be worn in busy parts of Amsterdam and Rotterdam has had a ‘dramatic’ impact on local shops. Some have seen their turnover slump by up to 40% since masks were introduced two weeks ago, the organisation said.

INretail has called on local government officials to talk to retailers directly if there is an increase in coronavirus infections that require additional measures. The ‘sudden’ introduction of masks, as happened in Amsterdam and Rotterdam, should not happen again, the organisation said.

Meanwhile, in The Hague, riot police arrested several protestors who were demonstrating against government coronavirus policy outside the parliamentary complex.

Some 40 people had gathered next to the Binnenhof, and the complex was sealed off for a time as police moved in to break up the demonstration.

In Rotterdam, where there have been 70 new cases reported overnight, a city centre restaurant has been closed down because it is at the heart of a new cluster, local media reported.