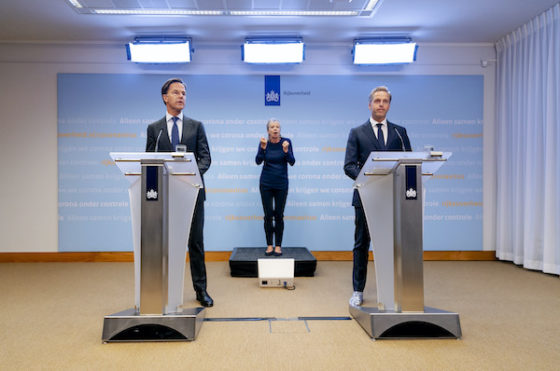 In addition, freshers’ week activities for new students are to be scaled back sharply, and mayors will be able to impose curfews on cafes and bars, prime minister Mark Rutte told a news conference on Thursday evening.

The number of infections in the Netherlands has doubled to 2,588 in the past week, and 601 cases were reported overnight. While this is not a reason for panic, a concerted effort is needed at a local, regional and national level to keep the virus under control, Rutte said.

The 1.5 metre rule is being more widely ignored and fewer people are staying at home to work or if they have symptoms, he said. ‘The virus is an uninvited guest at birthday parties.’

The prime minister also spoke directly to youngsters, who are responsible for a growing proportion of new infections.

‘If too many of you ignore the rules, we will all be stuck inside and you will be a danger to your grandparents and vulnerable people,’ Rutte said. ‘Corona is not over, it is no joke and it is moronic to act as if it is.’

New infections have reached a worrying level, but have not yet reached a critical point, Rutte said. ‘If necessary, local and regional measures can be scaled up nationwide, and the role of local public safety chiefs is crucial in this,’ Rutte said, referring to the experiments with masks in Rotterdam and Amsterdam.

Rutte also appealed directly to tourists in Amsterdam to stay away from busy areas.

Mayors, he said, can bring in local face mask requirements in an effort to change people’s behaviour. They can also close busy car parks at the beach. New powers given to mayors include the ability to introduce curfews on cafes, bars and night shops and  to ban supporters from local sports events.

These measures can be expanded nationwide if necessary, Rutte said.

The government has also introduced tough rules for this years’ freshers’ week events for new students. In the main, Rutte said, they should be organised online. Physical meetings, which may not involve alcohol and must end at 10mp, must be informal, small scale and directly related to the study or to sport.

Student associations and fraternities, however, have been banned from organising initiation ceremonies for new prospective members.

Health minister Hugo de Jonge highlighted the need for regional approaches to combat the virus. The current situation in the Netherlands shows that the situation in Rotterdam requires a different approach to Drenthe, he said.

As regards foreign holidays, the minister was scathing about people spending time in high risk countries. ‘People don’t have to travel to an code orange area [such as Barcelona and Croatia],’ he said. ‘If they do, they must stay at home for two weeks and undergo a test if they have symptoms.’

In addition, officials will use airline passenger lists to check that people are staying home as required, he said. Testing at Schiphol will also be introduced for everyone flying in from a risky location, but cannot be made compulsory.

De Jonge also confirmed that trials of the controversial government app will begin in Drenthe and Twente on August 12, and the aim is to roll the app out nationwide in September.

Both ministers also stressed that it is up to everyone to obey the guidelines to keep the virus under control. ‘I am not a dictator, and we are giving you the facts,’ Rutte said. ‘In the end it is up to us, as adults in an adult democracy. We all have to stick to the rules.’