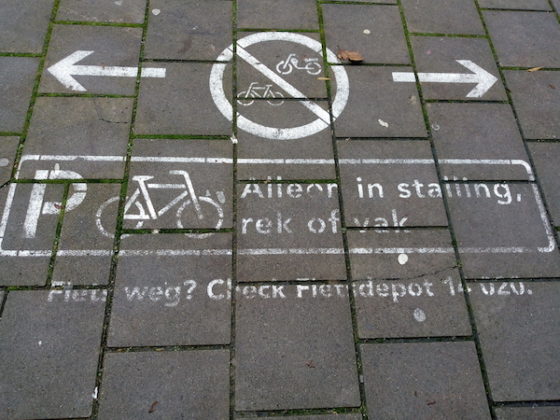 Bikes to the value of €600m were stolen in the Netherlands last year, and organised gangs are moving in, according to new research by Bureau Beke.

The figure of €600m is based on an estimate of how many bikes were stolen in 2019, multiplied by the average cost of a new bike. Just some 20% of bike thefts are actually reported, largely by people whose two-wheelers are insured, and only 4% of stolen bikes are ever recovered.

E-bikes in particular are now being targeted by organised gangs and exported abroad, the researchers said. ‘The price of bikes is going up, and so they become more attractive to steal,’ Jos Kuppens told broadcaster RTL.

Bikes are not only being stolen in the street and loaded into vans, Kuppens said. Bike shops too can be emptied in a few seconds and rental companies such as Swapfiets are also increasingly faced with organised theft.

The report suggests that more should be invested in official bike parks and bike racks to make it harder for thieves to pick up a bike and leave.

The ANWB, which is the biggest Dutch bike insurance company, said in March there had been a spectacular rise in the theft of electric bikes – up 38% last year.

Last year 420,000 new e-bikes were bought in the Netherlands and they now account for the biggest segment in bicycle sales.

Bikes which have been fitted with a GPS transmitter are much more likely to be recovered than those without, the ANWB show. According to some estimates, 80% of e-bikes with a GPS tracing system are found – as long as the theft is reported straight away.