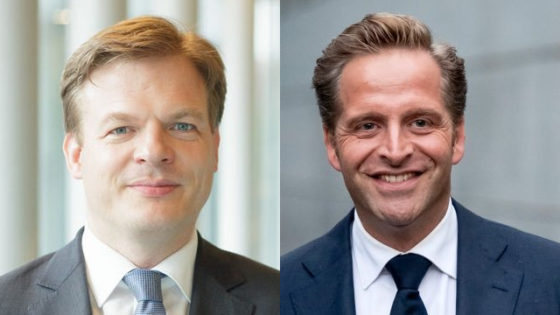 Voting to choose the leader of the Christian Democrats (CDA) for next year’s election closed at noon on Tuesday, with the winner due to be announced 24 hours later.

A debate between the two candidates, Hugo de Jonge and Pieter Omtzigt, on late-night talk show Op1 produced no real flashpoints, with both stressing the greater importance of ‘team CDA’.

De Jonge remains the favourite to win the second-round ballot after polling 48.7% in the first round on Sunday – just short of the majority needed to claim victory. Omtzigt took 39.7% of the vote but won the endorsement of the third candidate, Mona Keijzer, who was eliminated on 11.6%.

De Jonge came under fire over the weekend for his handling of the coronavirus crisis. In an interview with De Volkskrant, the head of the national intensive care association, Diederik Gommers, said he felt he had been pressured by the health minister to ensure 1,600 specialist beds were available by the beginning of April.

A member of staff at the health ministry contacted Gommers on March 26 while De Jonge was being questioned by MPs, and the minister quoted his reply in the chamber. ‘Even though I didn’t know and don’t have any say over the availability of ICU beds,’ said Gommers. ‘Then I thought: all right then. If it’s so incredibly important to Hugo de Jonge, I’ll tell him we’ll have 1,600 beds by Sunday.’

Omtzigt claimed a public relations scoop when the finance minister, Wopke Hoekstra, told the Telegraaf that he would accept the role of prime minister if asked by Omtzigt, who has said he would prefer to remain an MP even if the CDA becomes the largest party.

Omtzigt has built his career as a backbench campaigner highlighting injustices such as the tax office child benefits scandal, but under Dutch constitutional law he would have to give up his seat to take a cabinet post.

Hoekstra did not explicitly back either of the two candidates, but media outlets interpreted his response as a tacit endorsement of Omtzigt’s campaign. De Jonge played down the significance of Hoekstra’s statement: ‘It’s natural in a leadership contest to talk about a “team Omtzigt” or a “team De Jonge”, but ultimately there is only one “team CDA”,’ he said.

‘We’re talking now about how we share out the jobs later, but we have a different task to sort out first, which is to find a captain for team CDA.’