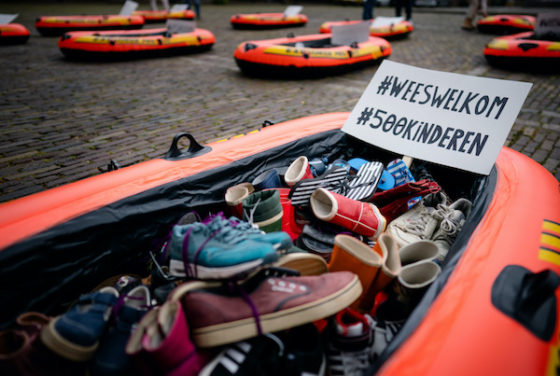 A group of twelve Dutch Jewish and Sinti people who were went into hiding with other families during World War II have sent an open letter to MPs urging them to allow 500 children from Greek refugee camps to come to the Netherlands.

The letter, signed by sociologist Abram de Swaan, writer Chaja Polak and journalist Hanneke Groenteman among others, comes ahead of Thursday’s vote on a motion to allow unaccompanied Afghan and Syrian minors to come to the Netherlands and escape the often dire circumstances in the camps.

Some 150 local authorities have already said they are willing to welcome the children, the letter writers point out. So far the government has refused to let any children in, claiming it is helping ‘on the ground’ by organising foster homes for children on the Greek mainland.

‘We were saved as children, often by complete strangers. We were Jewish or Sinti and we were persecuted and had to find a place to hide. We were helped by people of all faiths, often Christians who put themselves at great risk,’ the letter writers said.

They also point out that no such courage or perseverance is called for now, ‘simply empathy and decent human mercy’.

Other European countries have taken in children, Germany among them, in response to a request from the Greek government to give refuge to 2,500 minors who are living in the camps without their parents. Some 40,000 refugees are now living in cramped conditions in the Greek islands.