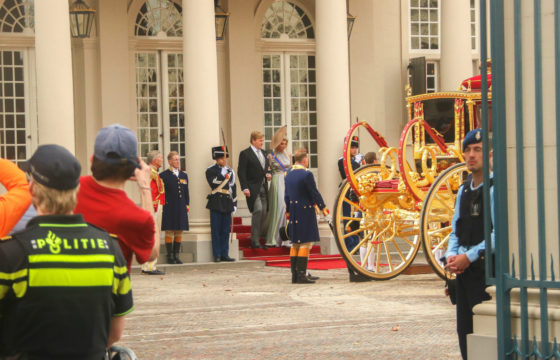 This year’s budget day will be stripped of its traditional pageantry, with the king’s glass coach tour through the streets of The Hague and appearance on the balcony of Noordeinde palace cancelled because of coronavirus restrictions.

Tens of thousands of people traditionally come to The Hague on the third Tuesday in September to watch the ceremonies unfold that go with the official presentation of the budget on Prinsjesdag, which this year falls on the 15th.

The sight of the royal couple in their glass coach as they make their way from the palace to the parliament complex at the Binnenhof is particularly popular. Many take their place behind the gates of the palace early in the morning for the balcony scene, which takes place after the king delivers his speech from the throne.

There will ‘limited military ceremonial’ activity around the Noordeinde palace and the Grote Kerk but no members of the public will be allowed to attend, the mayor of The Hague, the chair of the Senate and the commander of the military police said in a joint statement.

It is the first time since the start of the tradition in 1904 that member of the public have been excluded from the events.

‘It’s a wonderful and festive day but it simply attracts too big a crowd,’ city mayor Jan van Zanen told broadcaster NOS. ‘It’s not safe so there’s was nothing for it but to cancel.’

Van Zanen said he did not believe people would be able to keep to the 1.5 metre social distance and it would be ‘impossible’ to police.

The speech itself has been moved from the Ridderzaal at the Binnenhof, which is too small for social distancing, to the Grote Kerk. The guest list has also been substantially shortened, the broadcaster said, with MPs’ partners, social organisations and diplomats having their invitations cancelled.

This is expected to impact severely on the number of extravagant outfits and hats which are a feature of the day.

Chair of the Senate Jan Antonie Bruijn said the throne will be making the move to the Grote Kerk as well. ‘It’s going to be a special day,’ he said.